God Commands It.The most important reason to do apologetics is that God told us to do so. The classic statement is 1 Peter 3:15, which says, “But in your hearts set apart Christ as Lord. Always be prepared to give an answer to everyone who asks you to give the reason for the hope that you have. But do this with gentleness and respect.” This verse tells us to be ready. We may never run across someone who asks tough questions about our faith, but we should still be ready to respond if someone does. Being ready is not just a matter of having the right information available, it is also an attitude of readiness and eagerness to share the truth of what we believe. We are to give a reason to those who ask the questions. It is not expected that everyone needs pre-evangelism, but when they do need it, we must be able and willing to give them an answer. This command also links the work of pre-evangelism with Christ’s place as Lord in our hearts. If he is really Lord, then we should be obedient to him as “we demolish arguments and every pretension that sets itself up against the knowledge of God, and we take captive every thought to make it obedient to Christ” (2 Cor. 10:5). This means we should confront issues in our own minds and in the expressed thoughts of others that prevent us and them from knowing God. That is what apologetics is all about. In Philippians 1:7 Paul speaks of his mission as “defending and confirming the gospel.” He adds in verse 16, “I am put here for the defense of the gospel.” This implies that the defender of the gospel is out where he or she can encounter others and defend truth. Jude 3 adds, “Dear friends, although I was very eager to write to you about the salvation we share, I felt I had to write and urge you to contend for the faith that was once for all entrusted to the saints.” The people Jude addressed had been assaulted by false teachers, and he needed to encourage them to protect (literally agonize for) the faith as it had been revealed through Christ. Jude makes a significant statement about our attitude in verse 22, that we “have mercy on some, who are doubting.” Titus 1:9 makes knowledge of Christian evidences a requirement for church leadership.An elder in the church should “hold firmly to the trustworthy message as it has been taught, so that he can encourage others by sound doctrine and refute those who oppose it.” Paul also gives us an indication of our attitude in this work in 2 Timothy 2:24-25: “And the Lord’s servant must not quarrel; instead, he must be kind to everyone, able to teach,not resentful. Those who oppose him he must gently instruct, in the hope that God will grant them repentance leading them to a knowledge of the truth.” Anyone attempting to answer the questions of unbelievers will surely be wronged and be tempted to lose patience, but our ultimate goal is that they might come to a knowledge of the truth that Jesus has died for their sins. With so important a task at hand, we must not neglect obedience to this command. Reason Demands It.God created humans to reason as part of his image (Gen. 1:27; cf. Col. 3:10). Indeed, it is by reasoning that humans are distinguished from “brute beasts” (Jude 10). God calls upon his people to use reason (Isa. 1:18) to discern truth from error (1 John 4:6) and right from wrong (Heb. 5:14). A fundamental principle of reason is that it should give sufficient grounds for belief. An unjustified belief is just that—unjustified. Socrates said, “The unexamined life is not worth living.” He surely would have been willing to add that the unexamined belief is not worth believing. Therefore, it is incumbent upon Christians to give a reason for their hope. This is part of the great command to love God with all our mind, as well as our heart and soul (Matt. 22:36-37). The World Needs It. People rightly refuse to believe without evidence. Since God created humans as rational beings, he expects them to live rationally, to look before they leap. This does not mean there is no room for faith. But God wants us to take a step of faith in the light of evidence, rather than to leap in the dark. Evidence of truth should precede faith. No rational person steps in an elevator without some reason to believe it will hold him up. No reasonable person gets on an airplane that is missing part of one wing and smells of smoke in the cabin. People deal in two dimensions of belief: belief that and belief in. Belief that gives the evidence and rational basis for confidence needed to establish belief in. Once belief that is established, one can place faith in it. Thus, the rational person wants evidence that God exists before he places his faith in God. Rational unbelievers want evidence that Jesus is the Son of God before they place their trust in him. 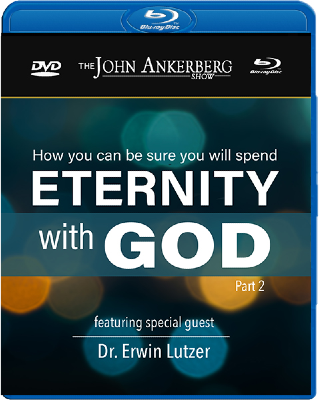 It is vital to ask the question, “Am I sure that I will spend eternity with God?” In Part 2 of this series, Dr. Lutzer begins with important information about the gift God says we can’t live without. Next, we address the topic “The Miracle We Need.” We also talk about the concept of being held in God’s hands and answer the question, “How can I know for sure I am saved?” We conclude with addressing the doubts believers have, including how these doubts can drive us to better grow in our faith. These vital topics will encourage and equip you in your spiritual journey as you seek to live for the Lord. These three programs will further your understanding of God’s gift of salvation in ways that will help you confidently serve Him today.

Order
Stay Connected with your favorite Ministry Newsletters and Devotionals
More Newsletters
Sign Up
In addition to your newsletter(s), you will receive email updates and special offers from Lightsource.com.
Privacy Policy / Terms of Use
Devotionals Articles Cancel

Ankerberg Q&A features question and answer clips from The John Ankerberg Show, a weekly half-hour internationally syndicated television program. The John Ankerberg Show uses informal debates between representatives of differing belief systems, and documentary-styled presentations to explore major issues in society to which the historic Christian faith has something of consequence to say. The programs are designed to appeal to a thinking audience of Christians and non-Christians alike.

Dr. John F. Ankerberg in his writings and on his television program presents contemporary spiritual issues and defends biblical Christian answers. He believes that Christianity can not only stand its ground in the arena of the world's ideas but that Christianity alone is fully true. He has spoken to audiences on more than 78 American college and university campuses, as well as in crusades in major cities of Africa, Asia, South America, and the Islands of the Caribbean. He is a member of the Board of Directors of the National Religious Broadcasters. He and his wife, Darlene, have one daughter, Michelle.