[Ezekiel 18:1-4] God asked Ezekiel about a proverb being circulated. This proverb—The fathers eat sour grapes, and the children's teeth are set on edge—must have been well known in Israel because Jeremiah also quoted it (cf. Jer. 31:29-30). The proverb's point was that children were suffering because of their parents' sins. True, Jerusalem was suffering, but as stated in the proverb the people thought they were suffering not because of their sins but because of their parents' sins. So these people were blaming God for punishing them unjustly (cf. 18:25).

God saw that this false proverb had to be refuted. Yet, as with all false doctrines, a kernel of truth in the teaching made it seem plausible. In the Ten Commandments God indicated that He was "a jealous God, punishing the children for the sin of the fathers to the third and fourth generation of those who hate Me" (Ex. 20:5; cf. Ex. 34:6-7; Deut. 5:9; Ezek. 16:15-29)…. But the point of these passages was that the effects of sin are serious and long-lasting, not that God capriciously punishes the innocent for their ancestors' evil ways.

Blaming others for their misfortunes, the people were denying their own guilt. This was wrong, because every individual is personally responsible to God…. Those who are guilty will receive their own deserved punishment…. The people of Israel could not rightly charge God with injustice. 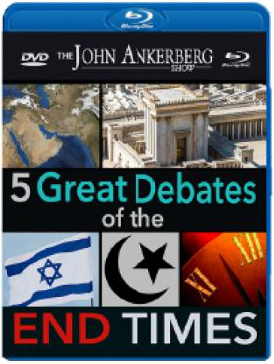 5 Great Debates of The End Times

The Bible discusses five great debates that have caused great curiosity among Christians. Which nations does the prophet Ezekiel predict will come against Israel in the last days? Is it possible that the antichrist will be a Muslim? What about replacement theology? Has the church really replaced Israel as the recipient of God’s promises and blessings? Will the Jewish temple be rebuilt on the Temple Mount before Jesus returns? What nations are involved in the Battle of Armageddon? What does the Bible teach about these 5 important future events? Join Dr. Ankerberg as he discusses these prophetic debates in three exciting programs.

Order
Stay Connected with your favorite Ministry Newsletters and Devotionals
More Newsletters
Sign Up
In addition to your newsletter(s), you will receive email updates and special offers from Lightsource.com.
Privacy Policy / Terms of Use
Devotionals Articles Cancel

Ankerberg Q&A features question and answer clips from The John Ankerberg Show, a weekly half-hour internationally syndicated television program. The John Ankerberg Show uses informal debates between representatives of differing belief systems, and documentary-styled presentations to explore major issues in society to which the historic Christian faith has something of consequence to say. The programs are designed to appeal to a thinking audience of Christians and non-Christians alike.

Dr. John F. Ankerberg in his writings and on his television program presents contemporary spiritual issues and defends biblical Christian answers. He believes that Christianity can not only stand its ground in the arena of the world's ideas but that Christianity alone is fully true. He has spoken to audiences on more than 78 American college and university campuses, as well as in crusades in major cities of Africa, Asia, South America, and the Islands of the Caribbean. He is a member of the Board of Directors of the National Religious Broadcasters. He and his wife, Darlene, have one daughter, Michelle.