The Christians' Resurrected Body in Christ, Part 1 By Hank Hanegraaff

This is a question I encountered frequently after the death of my father. Family members and friends wanted to know whether my dad had become a disembodied soul or whether he had received his resurrection body the moment he died. Dr. Norman L. Geisler, president of Southern Evangelical Seminary, points out that those teaching that believers receive their resurrection bodies at the moment of death often do so as a result of misunderstanding or misinterpreting 2 Corinthians 5:1-10.

First and foremost, as noted by Dr. Geisler, the passage under consideration, as well as the rest of Scripture, clearly refers to the moment of death as one of disembodiment, not of re-embodiment. (v. 2) In the immediate context, Paul refers to death as being "naked" (v. 3) or "away from the body" (v. 8). Why would he dread being "naked" if he were going to receive another body at the moment of death? Says Geisler, "Speaking of death as disembodiment ('absent from the body') and as an undesirable experience makes little sense if that is the moment of one's ultimate triumph with a resurrection body (see 2 Corinthians 5:1, 4; 1 Corinthians 15:50-58 NKJV)." In fact, Paul makes it crystal-clear in verse 8 that being "at home with the Lord" is tantamount to being "away from the body."

Further, if believers received their resurrected bodies at the moment of death, they obviously could not receive them at the Second Coming of Christ, as Scripture teaches (John 5:28-29; 1 Thess. 4:16). And finally, there is a direct correspondence between the body when it dies and the body when it rises. Thus, our resurrection bodies are not second bodies but our present bodies transformed. 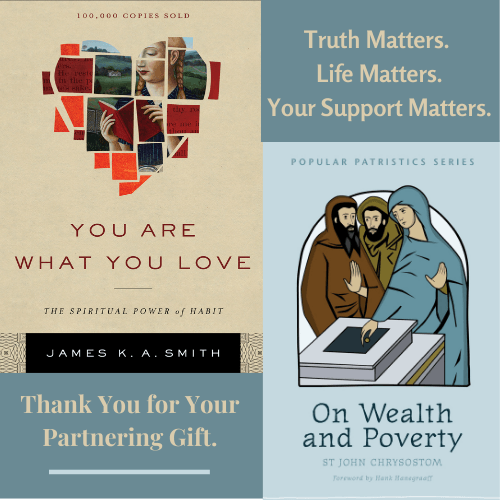 On Wealth and Poverty and You Are What You Love

“Jesus doesn’t encounter Matthew and John — or you and me — and ask, ‘What do you know?’ He doesn’t even ask, ‘What do you believe?’ He asks, ‘What do you want?’ This is the most incisive, piercing question Jesus can ask of us precisely because we are what we want.”   —from You Are What You Love, by James K.A. Smith