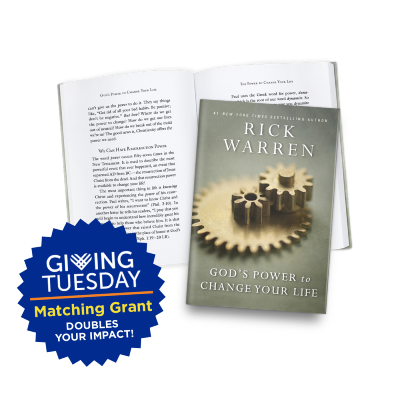 In a time when people are struggling with health issues, relationship troubles, and financial instability, Pastor Rick’s relatable and down-to-earth teaching is unlocking the Bible so people can find true and lasting healing through Jesus. Millions are being reached. . .but billions more are still waiting. And there’s nothing more important at this crucial moment in history than for us to boldly live out our faith—and bring more people to Jesus. Today’s $25,000 Matching Grant is an outstanding opportunity to extend your impact further—so even more people can hear the Gospel and become followers of Jesus. But this special matching opportunity is available TODAY ONLY, so please don’t miss it! As thanks for your GivingTuesday gift, we’ll send you Pastor Rick’s book, God’s Power to Change Your Life. This inspiring hardback book is filled with simple but profound truths from the Bible to help you finally see the life change you’ve been longing for.  Thank you for your generous GivingTuesday gift—doubled thanks to the Match— to help even more people around the world hear about the certain hope of Jesus. We appreciate you!

Get Yours Today!
Stay Connected with your favorite Ministry Newsletters and Devotionals
More Newsletters
Sign Up
In addition to your newsletter(s), you will receive email updates and special offers from Lightsource.com.
Privacy Policy / Terms of Use
Devotionals Cancel

Pastor Rick’s Daily Hope brings biblical hope and encouragement to people around the world. Through his daily audio and written devotional Bible teaching, Pastor Rick shares the hope of Christ and the biblical truths people need to fulfill God’s purposes for their life. https://PastorRick.com

As founding pastor of Saddleback Church with his wife Kay, Dr. Rick Warren leads a 30,000-member congregation in California with campuses in major cities around the world. As an author, his book The Purpose Driven Life is one of the best-selling nonfiction books in publishing history. It has been translated into 90 languages and sold more than 50 million copies in multiple formats. As a theologian, he has lectured at Oxford, Cambridge, Harvard, University of Judaism, and dozens of universities and seminaries. As a global strategist, he advises world leaders and has spoken to the United Nations, US Congress, Davos Economic Forum, TED, Aspen Institute, and numerous parliaments.

Pastor Rick also founded the Global PEACE Plan, which Plants churches of reconciliation, Equips leaders, Assists the poor, Cares for the sick, and Educates the next generation in 196 countries. You can listen to Pastor Rick’s Daily Hope, his daily 25-minute audio teaching, or sign up for his free daily devotionals at PastorRick.com.