Johnny Cash had an interesting father. A hard case with a short fuse, Ray Cash lived on wit and grit. And when he did work, it was as a day laborer, scraping out a hardscrabble existence through a variety of odd jobs and back-straining work in the midst of the Great Depression.

Ray was far from a model father, but Johnny loved him and spent his lifetime craving his approval. Ray grew up in hard times, and hard times make hard people. We are all, to a certain extent, products of our environment.

Maybe Ray Cash didn’t have much of a sensitive, nurturing side, but he didn’t abandon his family. And for the most part, he did the best he could. But there were times—even into Cash’s adulthood—where his ugly nature would rear its ugly head.

Even before Johnny was born, worthlessness, defeat, and inadequacy were already preprogrammed into the family and would form the backdrop of Johnny’s relationship with his father throughout his lifetime.

The good news is that God is a heavenly Father who loves, forgives, provides, protects, and disciplines His children. Because of the work of Christ on the cross, we already have the approval of the Father as Christ’s righteousness has been placed in our spiritual account.

We are in good standing and have an open door of communication with our gracious and loving Father in Heaven.

Samuel saw Eliab and thought, “Surely the LORD'Sanointed stands here before the LORD.”

“There is still the youngest,” Jesse answered. “He is tending the sheep.”

Samuel said, “Send for him; we will not sit down until he arrives.”

So he sent for him and had him brought in. He was glowing with health and had a fine appearance and handsome features.

Apparently, David wasn’t much in the estimation of his father, just like Johnny Cash. What kind of father did you have growing up? Were you constantly seeking his approval?

Behold what manner of love the Father has bestowed on us, that we should be called children of God! (1 John 3:1 NKJV)

No matter what your earthly father was like, you have a heavenly Father who loves you. Does that give you a sense of peace, purpose, or contentment?

Now the Angel of the LORD came and sat under the terebinth tree which was in Ophrah, which belonged to Joash the Abiezrite, while his son Gideon threshed wheat in the winepress, in order to hide it from the Midianites. And the Angel of the LORD appeared to him, and said to him, “The LORD is with you, you mighty man of valor!” . . .

So he said to Him, “O my LORD, how can I save Israel? Indeed my clan is the weakest in Manasseh, and I am the least in my father’s house.”

Though we may see ourselves as small, helpless, and unworthy—and others may view us that way as well, God sees our potential. He knows what we can become. What can you accomplish for God if you truly believe you have His favor and approval?

You can receive Johnny Cash: The Redemption of an American Icon, BOOK in thanks for your gift of support today.

Johnny Cash’s life is loaded with examples of God’s extreme mercy, overwhelming love, and unexpected grace. It demonstrates that no matter how many times we regress, relapse, or revert to old sins, God stands ready to welcome back His sons and daughters as a loving heavenly Father. Read about Johnny’s life in my new book!

This book is our thank-you gift to you when you donate to Harvest Ministries this month. 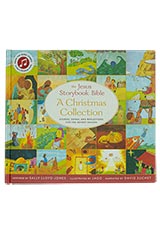 In thanks for your gift, receive 'The Jesus Storybook Bible Christmas Collection'

Let’s get back to the essential message of the gospel this Christmas, and focus on the true reason for the season in our families. Sally Lloyd-Jones’s new Christmas Collection of Bible stories can help! The Jesus Storybook Bible Christmas Collection is our thank-you gift for a donation of any amount.