Yom Kippur is the holiest day for Jewish People, whether in Israel or scattered throughout the world. For Messianic Jews, it holds the deep meaning of Yeshua as our atoning sacrifice.

“The Fall Feasts and the Messiah,” by Rabbi Jonathan Bernis

Yom Kippur is the holiest day of the Jewish year – a solemn time of acknowledging sins and seeking God’s forgiveness and mercy. Translated into English as the “Day of Atonement,” Yom Kippur was the only time of year the High Priest could enter the Most Holy Place of the Temple to atone for his own sins as well as for the sins of the entire nation of Israel. This was done by sacrificing a bull and a goat and sprinkling the blood of these animals on the mercy seat of the Arc of the Covenant.

Also on this day, two goats were brought before the High Priest of Israel. He would lay hands on them and symbolically transfer the sins of the people into them. The first one was the sacrifice – the one that provided atonement for the people’s sins. The second, however, was the scapegoat. This one was released into the wilderness to wander and eventually die, removing sin from the camp. The blood of the first goat brought forgiveness. The second brought sanctification.

I want to mention two important points here. First, sacrifices under the Mosaic covenant only covered sin, whereas the atonement of Yeshua removes sin. Second, substitutionary atonement was not provided for sin requiring the death penalty. Under the Law of Moses there was no atonement for intentional sins such as adultery or murder. In other words, they had to pay with their own lives.

I want to emphasize also that the shedding of blood has always been required for the forgiveness of sin, and it always will be. That is why Yeshua the Messiah had to die and shed His blood for us. That is the good news. We have a Redeemer who exchanged His blood for ours. The debt we owe, for both intentional and unintentional sins, was paid by Yeshua through His death on the tree. All we have to do is accept His sacrifice on our behalf.

For Messianic Jews, Yom Kippur has a special meaning, knowing that the sacrifice instituted by God ages ago to be observed year after year reveals man’s need for a complete sacrifice, covering all his sin and eternally. God provided that for us in Yeshua.

Yom Kippur also looks forward to the day foretold in Bible prophecy by Isaiah when “the Redeemer will come to Zion” (Isaiah 59:20), by Jeremiah, who said, “they will all know Me, from the least to the greatest” (Jeremiah 31:34), and the prophecy by Zechariah says, “they will look upon the One they have pierced and mourn for Him as if mourning for a firstborn son” (Zechariah 12:10). Yom Kippur will reach its fulfillment when Yeshua is recognized as King of the Jews, King of Israel, King of kings, and Lord of lords. This will be the day when “all Israel shall be saved” (Romans 11:26). I long for this day, as I know you do. I believe it is coming soon.

Find more from Jonathan Bernis and Jewish Voice at LightSource.com! 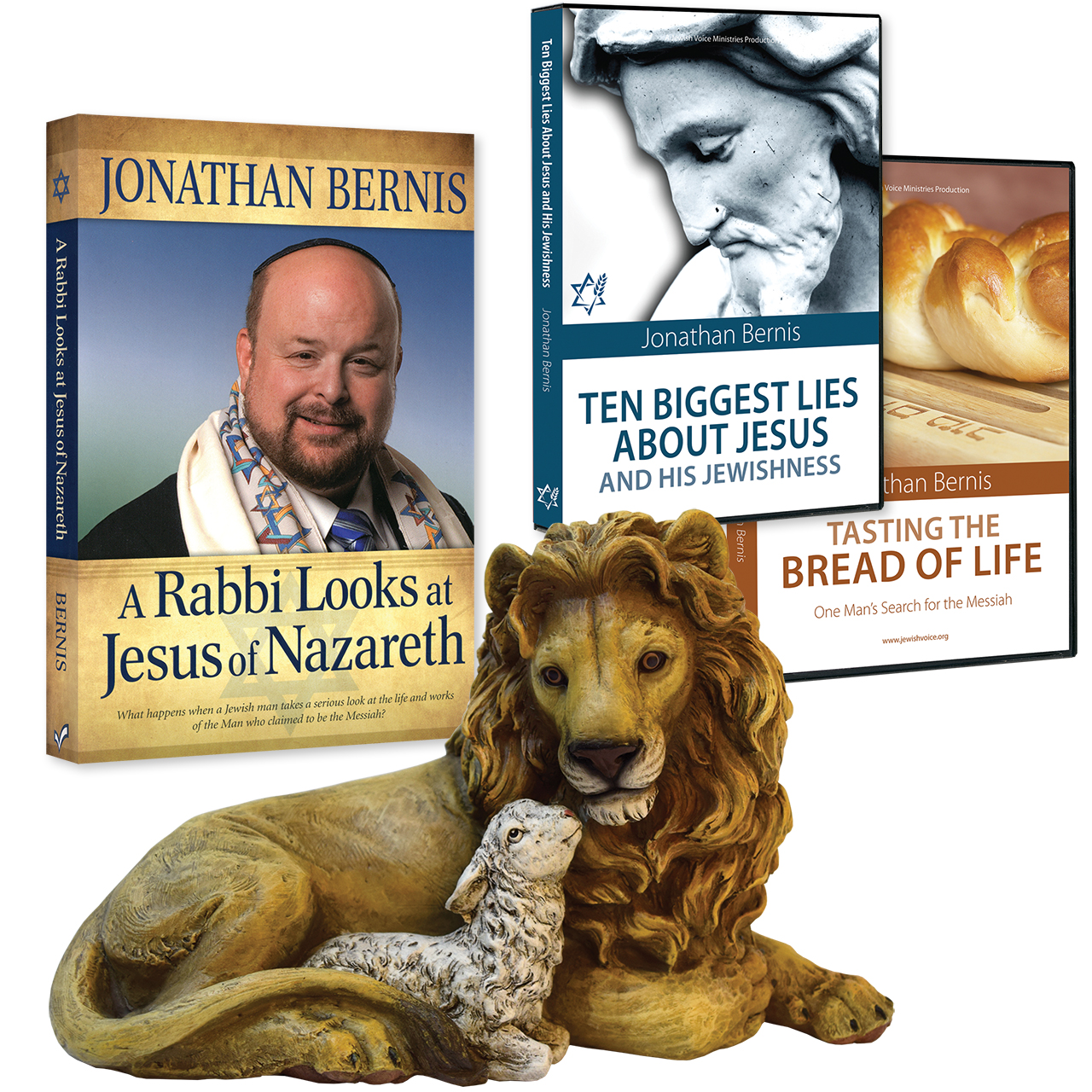 This package includes: A Rabbi Looks at Jesus of Nazareth - With warmth and transparency, Jewish Voice’s own Rabbi Jonathan Bernis shares a compelling case for Jesus as Messiah and presents overwhelming evidence that can be traced to the Torah itself. A Rabbi Looks at Jesus of Nazareth goes on to provide Christians the knowledge and tools they need to effectively share Yeshua (Jesus) in a loving and sensitive way with their Jewish family and friends.; The 10 Biggest Lies About Jesus and His Jewishness DVD - In this powerful DVD teaching, Rabbi Jonathan Bernis goes straight to the Scriptures to reveal a historic an accurate picture of Jesus’s life, teachings, and the Jewish culture that was His own.; Tasting The Bread of Life CD - Filled with wonderful anecdotes, strong teaching, and scriptural truth, this personal testimony from Rabbi Jonathan Bernis will have you both laughing and learning. Follow Jonathan’s journey from darkness to salvation, and then on to leadership in the Messianic Jewish movement.; Lion and Lamb Figurine - This lovely statue depicting a lion and a lamb lying peacefully together is hand painted and beautifully crafted of resin.

Jewish Voice Ministries is dedicated to proclaiming the Gospel of Yeshua (Jesus) to the Jew first and also to the Nations throughout the world. The Good News is proclaimed through television, monthly webcasts, print and online media, international festival outreaches, medical clinics/humanitarian aid to the Lost Tribes of Israel scattered throughout Africa and India, as well as speaking engagements to educate the Church about the Hebraic roots of Christianity and the Church's responsibility to Israel and the Jewish People.

Jonathan Bernis is President and CEO of Jewish Voice Ministries International (JVMI) and has been a leader in Messianic Jewish ministry for more than 30 years. He hosts JVMI’s weekly syndicated television show, “Jewish Voice with Jonathan Bernis,” aired worldwide.


Jewish Voice exists to transform lives and help fulfill the biblical mandate to see all Israel be saved. The ministries’ mission is to proclaim the Gospel, grow the Messianic Jewish community, and engage the Church concerning Israel and the Jewish people.


Rabbi Bernis is a sought-after speaker and a popular radio and TV guest. He has authored numerous books, including Unlocking the Prophetic Mysteries of Israel and his best-selling “Rabbi” series.


Jonathan and his wife, Elisangela, live in Phoenix with their two daughters.