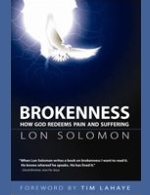 In 1992, Pastor Lon Solomon's career was on a speedy ascent. He was the senior pastor at McLean Bible Church, an influential and rapidly growing church in the suburbs of the nation's capital. In his weekly sermons he was funny, engaging, and self-effacing. He was successful, comfortable, respected by his peers and reaching Washington's elite decision makers. His life could not have been better. That's precisely when his world began to crumble. He didn't see it at the time, but today Pastor Solomon knows that God was sending the blessing of brokenness to him. It came in the form of a beautiful daughter who for years would suffer through thousands of seizures and become severely impaired, physically and mentally. He and his family were thrust into days of emotional darkness. Pastor Solomon began to question his faith and feared he would fail his congregation. In this touching and important book, he tells how God shattered him for the sole purpose of helping him reach his full potential as a servant of Christ. Today, his church is having a major impact on Washington, D.C., with more than 10,000 worshipers attending services each weekend. Read this book and you'll never be the same.

Order Now
Stay Connected with your favorite Ministry Newsletters and Devotionals
More Newsletters
Sign Up
In addition to your newsletter(s), you will receive email updates and special offers from Lightsource.com.
Privacy Policy / Terms of Use
Podcast Cancel

Lon Solomon was born and raised in a Jewish home in Portsmouth, VA. While in college, Lon’s life became a relentless search for meaning and purpose. He sought to fill the void he felt on the inside with fraternity life, partying, gambling, and a serious drinking problem. When all this failed to supply the inner peace he was seeking, Lon became deeply involved in drugs, both as a user and a distributor. He turned to “spiritual” things at this point, diving into psychedelics, Eastern religions and even attempting a return to mainstream Judaism. But all this failed to resolve his inner turmoil, and he decided that suicide was the only reasonable way out.

It was at this time that Lon met a street evangelist in Chapel Hill, NC who began to talk to him about Jesus Christ. God worked powerfully through months of interaction with this man, resulting in Lon’s decision to accept Jesus as his personal Savior and Messiah in the spring of 1971.

Lon is a marvelous example of God’s transforming power in action.

Subsequent to his decision to accept Christ, Lon was able to quit the drug and alcohol abuse that had plagued his life for years. He graduated from the University of North Carolina at Chapel Hill with a B.S. in Chemistry (1971). He completed a Th.M. degree in Hebrew and Old Testament at Capital Bible Seminary (1975, summa cum laude). He completed graduate work at Johns Hopkins University, receiving a Masters Degree in Near Eastern Studies in 1979. He taught Hebrew and Old Testament at Capital Bible Seminary from 1975-1980. In 1980, Lon became the Senior Pastor at McLean Bible Church. He received a Doctorate of Divinity degree from Liberty Baptist Theological Seminary in 2005.

Lon has been on the Board of Jews for Jesus since 1987, where he now serves as chairman of the Board’s executive committee. In September 2002, Lon was appointed by President George W. Bush to serve in his administration as a member of the President’s Committee on Intellectual Disabilities. Lon served two two-year terms in this capacity. Lon is the author of the book, Brokenness—How God Redeems Pain and Suffering and The 23rd Psalm for the 21st Century.

Lon and his wife, Brenda, have been married since 1974. They have four children.