Did God Tell Us to Stay Out of Politics?

What does God say about Christian citizenship—our responsibilities, our duties, our rights? Is the Bible against participating in politics? What are Christians to do and think about politics?

Many Christians simply drop out. Maybe they’ve given up hope. They’re just waiting for Jesus to come rescue them. Or they see politics as dirty. Some are intimidated by the ACLU. Cowering, they think Christians have no rights.

Where are the answers? Here in the Word of God. Our question isn’t “Should we be involved in government issues?” but “Can we be a Christian and not be involved?”

Romans 13:1-7 speaks clearly about Christian citizenship. Paul writes in verse 1, “The authorities that be are ordained of God.” Daniel 2:21 tells us, “He removes kings and sets up kings”—even wicked ones sometimes—using them to carry out His purposes. God ordains human government.

Government must be free to restrain evil so that the church can be free to preach the Gospel. We uphold the standard of truth. We are the conscience of the state.

Our Constitution’s framers were extraordinarily wise. Where did such wisdom come from? They were soaked in the Word of God.

Jesus paid His taxes; you should pay yours.

Should I pray for my leader if he’s wicked? Pray for him all the more! God can change a ruler, remove a ruler, and overrule a ruler (Proverbs 21:1). The greatest responsibility Christians have as citizens is to pray for our leaders.

When our government is good, praise it. Patriotism, love of the fatherland, is not wrong.

4. Preach to your country.

God’s people dare not be silent. Nor should we dare identify the Christian faith with either the Democrat or Republican party. We need to tell both to repent and get right with God.

5. Participate in your government.

Our government is “of the people, by the people, for the people.” If you don’t participate, get informed, and vote, you’re disobeying the Lord Jesus Christ (Matthew 22:21). It’s inconceivable that God would ordain human government, then tell His people to stay out of it. Who does that leave to run it? Christians must participate not on the basis of parties, persons or politics, but principles.

That’s where the power is. It’s not political influence we need, it’s the power of God. If we change America, we’ll change politics. 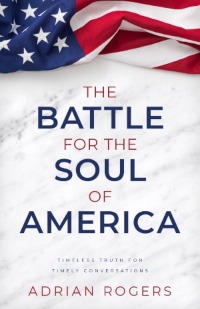