Can God be good if He lets people die and go to Hell when they’ve never once heard of Jesus? This question has troubled sincere people through the ages. And for unbelievers, it’s an excuse to keep from coming to Jesus Christ. Some have decided there is no God. They’ve become atheists. They also ask another question:

“Can those who’ve never heard of Jesus still go to Heaven? Maybe there’s some other way?”

The Apostle Paul answers these questions in the first chapter of Romans.

First, let me say, God is righteous and just. Second, there is no other way to Heaven apart from Jesus Christ. I hope you understand that. Don’t fall for the idea that all world religions are somehow connected and everybody’s going to be saved somehow. No, Jesus said in John 14:6, “I am the Way, the Truth, and the Life. No man comes to the Father except through Me.”

If anyone could come to God another way, what does that make Jesus? A liar. If Jesus Christ is a liar, He’s not your Savior—because a liar is nobody’s Savior.

We must understand four truths about this from Romans 1.

1. Every Person Has Some Light

All people everywhere have been given enough light to know there is a God.

Light comes through the beauty of creation itself, as Romans 1:16-20 clearly explains. At the final judgment, those who never heard the Gospel, as well as those who did and rejected it, will stand before God. Romans 1:18 will indict them: “For the wrath of God is revealed from heaven against all ungodliness and unrighteousness of men, who suppress the truth in unrighteousness.”

Everyone claiming they know nothing of God must answer to the outer witness of creation and the inner witness of conscience (Romans 2:14-15a).

When God gives you light, if you do not desire to know Him, you begin to regress and “suppress the truth in unrighteousness,” because of sin in your heart.

Atheists aren’t atheists because of intellectual problems but because of moral problems. We all have a God‑consciousness, but an atheist rejects it so he can continue with his lifestyle.

Deep in your heart, conscience speaks. But the farther away you get from the light, the more your heart is darkened (Romans 1:21). Unbelief is the baggage accompanying sin.

When lost people suppress truth, a time comes in which God will send strong delusion so they will believe the enemy’s lies (2 Thessalonians 2:9-12). They looked at God, looked at their sin, and taking pleasure in their sin, they turned away from Him.

God is not willing that any should perish (2 Peter 3:9), but He won’t violate your free will.

You are free to choose.

You are not free not to choose.

You are also not free to choose the consequences of your choice.

The problem for skeptics isn’t intellectual. It’s a problem of their will.

In John 7:17, Jesus promises if you’re seeking to know the truth and if you will to do the will of God, then you will know God is real, He exists, and Jesus is the Savior. Those who haven’t heard the name of Jesus yet will be given greater light if they follow the light they were first given.

God knows how much light we each have and holds us accountable according to that light. God doesn’t judge us by the sin we’ve committed but by the light we’ve rejected (Romans 2:5-16).

If you hear the Gospel and reject it, you will get further from the truth, and your heart will darken. Never say you didn’t have a chance.

Even if there’s just a glimmer right now, come to the light. Obey what you do know. God will teach you what you don’t know. Don’t let some intellectual problem keep you from Jesus. You’ll wake up in Hell and still won’t have it all figured out. Just come like a child and trust Christ. 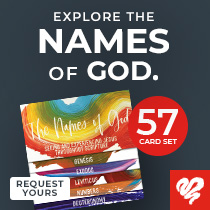 You will see and experience Jesus in a new way through the Names of God card set. Love Worth Finding partnered with Will and Courtney Kassner of Crew + Co to produce this 57-card set that explores the Names of God from Genesis to Revelation. Each 3 x 5 card includes original art on one side and a short story inspired by one of God’s names on the other. Use the cards in your devotional time, place them in your Bible as bookmarks, display them as art in your home or office, or give them as gifts. What better way to know Jesus than through His names?