The Power of the Blood Covenant

You may not know it, but God made a blood covenant with you when you were saved. Christmas and God’s covenant are locked together. The whole Bible is about His blood covenant, beginning with Abraham in the Old Testament (Genesis 15:9-21), continuing through the New Testament.

When David was young, long before he became Israel’s greatest king, something happened in his life that is a portrait of God’s blood covenant. Just after David killed Goliath, he and Jonathan, his best friend and son of King Saul, formed an unbreakable bond. They made a covenant, vowing to be loyal forever to each other and to one another’s children (1 Samuel 18:1-3).

Jesus came to Earth to fulfill God’s covenant and promise of a Savior (Genesis 3:13-15). At the Last Supper, He said, “This cup is the new covenant in My blood, which is shed for you” (Luke 22:20), and through His blood, we are forgiven, redeemed, and accepted by the Father. Each time we come to the Lord’s Table, we celebrate the blood covenant.

Christmas in First and Second Samuel

David’s covenant with Jonathan pictured God’s blood covenant. King Saul, insanely jealous, hunted David like a wild partridge on Judea’s hills. Then when Saul and Jonathan were both killed in battle by one of Israel’s enemies, David, whom God had anointed back before his fight with Goliath, became king.

Jonathan left behind a little son, Mephibosheth. But his nurse didn’t know of the blood covenant between David and Jonathan. Fearful for his safety, she grabbed him up and ran to hide him from David in a desert wasteland. But she dropped the little boy and fell on him, crippling him for life. Many years passed. One day, David wondered if any of Jonathan’s family were still alive. When he learned of Mephibosheth, David sent for him.

Imagine how frightened Mephibosheth was. All his life, he believed if David ever found him, he would kill him. Yet the opposite occurred. David restored his inheritance, saying, “Dine at my table. Be like my son.”

Friend, centuries before the manger in Bethlehem cradled a king, you and I were the same—crippled, exiled from our King. In the Garden, before the Fall, we were destined to inherit and rule the Earth. Then we lost our inheritance.

Just as David sought Mephibosheth, God calls us to Himself. At salvation, He restores our inheritance. We become joint heirs with Jesus Christ (Romans 8:17). Mephibosheth is a picture of us. He had to:

Does that sound familiar? Repentance and faith are the terms for salvation in the New Testament! Immediately, Mephibosheth was transformed. “Christmas” came to the lowly exile. He is now transferred to the king’s palace and is dining on fine linen with David passing the bread to him.

This is what Jesus does for us—moves us from exile into the palace, covers us with the white linen of His righteousness (Revelation 7:9), seats us among His beloved, and restores our inheritance through the blood covenant.

Though Adam lost our inheritance, God made a promise in Genesis: a Redeemer would come. For Christ’s sake, God forgives and restores us. Each time we come to the Lord’s Supper, Jesus passes the bread to us.

God is a faithful covenant-keeper.

Are you aware of all you have?

Mephibosheth is a portrait of what Christmas brings to us. Long ago, your Heavenly Father made a blood covenant. Your elder brother, the Lord Jesus Christ, sealed it with His blood and brought you into His family, now and for eternity. 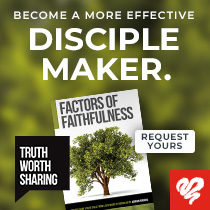 The Factors of Faithfulness guide, designed to help you be more effective as a disciple-maker, includes two bookmarks and two booklets with daily scripture readings based on Dr. Rogers messages in the Factors of Faithfulness series. Jesus’ last earthly instructions were to go and make disciples. For some, that is a call to missions or full-time ministry. But most are called to make disciples in our everyday lives and relationships. How can we do that?  Dr. Rogers said, “Point people to scripture and get out of the way!”  Love Worth Finding now has a new discipleship tool that will help you do just that.