God Goes to Extremes to Save You

The Lord is not slack concerning His promise, as some count slackness, but is longsuffering toward us, not willing that any should perish but that all should come to repentance. 2 Peter 3:9

Did you know Methuselah lived to be 969 years old? Before the Flood, people lived much longer lives than now. Scholars have speculated that their longevity was in part due to the protective canopy surrounding the earth’s atmosphere, giving it almost a greenhouse effect.

But apart from that, God had a very good reason for extending Methuselah’s life. His name means “When he is gone, it will come.” The “it” refers to The Flood. And according to the Word of God, The Flood began the very day Methuselah died. God kept letting him live and live because He didn’t want anyone to perish in that flood. God kept giving one more opportunity and one more chance. As it says, He is “not willing that any should perish, but that all should come to repentance.”

Reflect upon your life—are there times you can name when God intervened with mercy when He might have sent judgment instead? Perhaps there were times when He spared you from something, and later you look back upon that time and say, “God was so merciful.” Remember His mercy today and thank Him specifically for how He has covered your life with His garment of mercy. 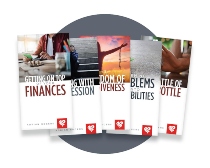