You’ve heard it before — “Winners never quit and quitters never win!” The famous American football coach Vince Lombardi frequently reminded his players of this life principle — you won’t win if you quit too soon.


There are many victories, breakthroughs, successes and achievements that only come after long seasons of, what seems like, fruitless effort. Tedious research, tireless practice, persistent efforts, patient investment, persevering prayer, long-term labor usually pays off, eventually.

The sad reality is that many of these pay-offs never come simply because people give up — they quit too soon. Days, weeks, years, decades of working and waiting, with little to show for it, can take its toll on your heart and soul. Let’s be honest, it’s hard to keep going when everything inside you is screaming “quit!”

While there are times to “throw in the towel” in pursuit of something, there are many more times when we need to “remain in the ring.” Many people “leave and lose” when victory is right around the corner.

There’s a great story in the Bible that reminds us of the power of persistence, especially in our obedience to God. It’s the Old Testament story of Naaman. You can read about him in 2 Kings 5. Here’s the essence of his situation.

Naaman contracted the deadly disease of leprosy. He was directed to the prophet Elisha for a miracle cure. Elisha gave Naaman instructions that he didn’t like. These instructions confronted Naaman’s pride and tested his patience. He was told to go and dip himself seven times in the Jordan River. God promised that in doing this he would be healed.

After much protest, Naaman finally agreed to obey God’s instructions. Notice what happened when he did:

So Naaman went down to the Jordan River and dipped himself seven times, as the man of God had instructed him. And his skin became as healthy as the skin of a young child’s, and he was healed! — 2 Kings 5:14 (NLT)

It’s very important to see that Naaman’s healing happened after the seventh dip. Dips one through six seemed to make no difference in his condition. Nothing improved and nothing changed until Naaman completed his seventh immersion in the muddy waters of the Jordan. But his persistent obedience paid off. On the seventh dip, healing came, breakthrough happen, the victory was won.

What if Naaman had stopped on dip two, or four, or five, or six? His story wouldn’t be in the Bible. We know about this man because he didn’t quit too soon! 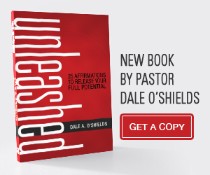 Positive changes happen in us when we know, believe, confess and obey God’s Word. When we agree with what God says about us, our minds are renewed, and our choices and habits improve. In this new book from Pastor Dale O'Shields, you will find 25 biblically-based affirmations that will help you think right about God, yourself, others and the world.

As it has for over a decade, our weekly broadcast continues to provide fresh, contemporary insights into Christ's teachings. Tune in and "get practical" in your walk with the Lord!

Dale O’Shields is the founding and Senior Pastor of four campuses in Maryland, just north of the greater Washington, DC area.

Dale O’Shields is known for his relevant teaching style focused on practical application in people’s lives. His messages are regularly broadcast on radio and television. He is also the author of several books, devotionals and group study guides.

Dale O’Shields is a frequent conference speaker with a passion for leadership development and church growth. He has served as the Senior Pastor of a thriving local church for over 25 years. His heart to equip and encourage pastors and church leaders has led him to be a key founder of United Pastors Network.

Dale O’Shields has been involved in pastoral ministry since 1978, serving previously as Director of Campus Ministries and as an adjunct instructor at Regent University in Virginia Beach, VA. He and his wife Terry have two married daughters and seven grandchildren.