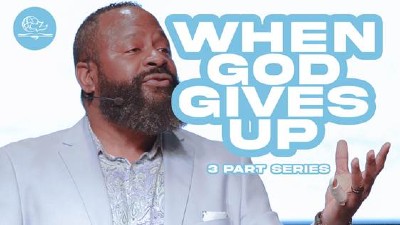 In his three part series entitled, “When God Gives Up,” Senior Pastor Tony Clark of Calvary Chapel Newport News Virginia focuses on God’s limitations in regard to sin. Is there a limit to God’s patience? Join us, as Pastor Tony answers this vital question in this must hear series. Download your copy today!

About The Word Made Plain

At The Word Made Plain, we believe as the word of God says that faith comes by hearing and hearing from the word of God. We want to support the growth experience by presenting video sermons to help increase the retention of the Word and allow the world to freely worship the Lord in Spirit and Truth.

Born and raised in the steel town of Gary, Indiana, Tony lived life “his own way” Monday through Saturday. However, Sundays were different because that was the day he would go to church. And even though he attended church, Tony had no idea what it meant to have a relationship with Jesus Christ.
After his first year in college, Tony decided to marry his high school sweetheart, Jenise, and join the United States Marine Corps. After boot camp, instead of starting a life with his new bride, Tony received military orders to be stationed in Okinawa, Japan. Going to this foreign land was more than an overseas adventure because it was here that he made a life-changing God commitment. He thrived in this newfound relationship and began learning about the Bible. It was in Okinawa that the Lord revealed to Tony that one day he would become a pastor.

When Tony returned to the states, he continued in his walk with the Lord and became an assistant pastor with a local church. Over time, Tony grew increasingly interested in the “new” teaching style of Calvary Chapel and began attending Calvary Chapel Vista. After a few years at Calvary Chapel Vista, Tony began thinking about the idea of pastoring a church. However, where would it be? Only God would know!

Even though Tony had never been to the East Coast, he decided to visit Virginia. After much prayer, Tony knew for certain that Newport News, Virginia was the place that God would have him to be a pastor. The desire of Tony’s heart is to see the community of Newport News and the Hampton Roads area transformed by continuing to preach the Good News of Jesus Christ. Tony continues to heed the call by passionately studying God’s Word, prayerfully seeking the Lord’s direction for His church, and vigorously pouring love into the lives of the people God leads his way – persevering until He comes!