But Daniel purposed in his heart that he would not defile himself with the portion of the king’s delicacies, nor with the wine which he drank; therefore he requested of the chief of the eunuchs that he might not defile himself. ( nkjv)

When Daniel was very young, probably a teenager, the Babylonians carried him away captive to Babylon. They brought him to the king’s palace to groom him in the Babylonian ways, along with his friends Shadrach, Meshach, and Abednego.

But Daniel was a man of purpose. The Bible tells us that he “purposed in his heart that he would not defile himself with the portion of the king’s delicacies, nor with the wine which he drank” (Daniel 1:8 nkjv).

Daniel made a principled stand to not eat the food at the king’s table. We don’t know why. The Bible doesn’t say. Maybe the Babylonians offered the food to idols, which I think was probably the case. But God honored their stand as a result. And in the end, Daniel and his friends were healthier than everyone else.

Daniel made a stand in a seemingly minor area. It doesn’t seem like a big thing, but it was to Daniel. Consequently, that experience gave him the strength he needed to make a stand in a significant area later in his life. 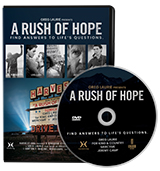