Henry Ford  once said, “Whether you think that you can, or that you can’t, you’re usually right.” Ford identified the power of a little statement, but  significantly different attitude.  He helped us understand the consequences of “I can“ and “I can’t” thinking.

One of the most limiting and destructive words in the English vocabulary is “can’t.” This contraction combines two opposite ideas — “can” and “not.” It negates possibilities, potential and ability. This is especially true when it’s combined with the personal pronoun, “I” — “I can’t!” How many folks are robbed of incredible possibilities, great potential and the development of phenomenal abilities because they bought into the “I can’t” mindset?

“I can’t” really is more of an attitude we hold than a statement we make. It’s a belief in the heart that eventually works it’s way out of our mouths. We say it because we think it about ourselves and about the circumstances we find ourselves in. It’s like a big bully that shows up when we are about to try something new, challenging or difficult. This threatening inner voice berates and intimidates. The result is, we usually give up before we even start.

This dark monster in our heads can often be traced back to things people have said to us or about us.  Somewhere and sometime in the past, someone significant labeled us as dumb, inadequate, inferior or insignificant.  And their opinion of us continues to rule us now. The “I can’t” mindset sometimes reflects the atmosphere we were raised in or the ugly, painful experiences we’ve had in life. Our soul has accepted a verdict — a curse — a self-fulfilling prophecy — that keeps us in bondage today.

In the Old Testament we find the story of a man who suffered with the “I can’t”complex. His name is Gideon. Gideon lived during a time of trouble in Israel. Because of sin and idolatry, God’s people were oppressed by the Midianites. Life for the Hebrews was a daily vigil and a constant struggle. They never knew when the next attack would come. They lived in fear.

One day, in answer to the prayers of God’s people, the Lord appeared to Gideon. God wanted to use this man to make a difference in his nation. He came and called Gideon into action — into active duty — to lead Israel to victory over her oppressors. God’s opinion was that Gideon was the man for the job.

But Gideon had another opinion. He shuddered at the thought of being a leader. He immediately told God how inadequate he was for such a task. The “I can’t do it” attitude kicked in big time for Gideon. Take a look at his response to the Lord:

Notice how Gideon discounted and disqualified himself when God spoke to him. Gideon was convinced that God was making a mistake in calling him. He didn’t see what God saw. He saw all that he wasn’t, all that he couldn’t be or do, but God saw who Gideon was and what he could be. The Lord saw the great potential He had placed in him. That day, the Lord confronted the “I can’t”in Gideon, and helped him become an “I can” man!

Gideon’s rise from the “I can’t” to the “I can” was based on a important truth. He could do what God wanted him to do, because God promised Gideon His presence and help. As Gideon humbly trusted God, the Lord assured him that great things could and would be done through his life:

The Lord said to him, “I will be with you.  And you will destroy the Midianites as if you were fighting against one man.”  —  Judges 6:16 (NIV)

Do you suffer from the “I can’t” complex? Does negativity rule you? Do you allow yourself to be limited by the bullying voices or painful memories of the past? Are you restricting what God wants to do in and through your life by self-discounting and self-disqualifying? Are you responding to God with the “But Lord …” argument?

Start changing the way you think! Your weakness is an opportunity for God to demonstrate His strength. Your inabilities are great opportunities for God to show His abilities. Remember the words of the Apostle Paul who had to learn this important lesson too:

I can do everything through Him who gives me strength.  —  Philippians 4:13 (NIV)

Know that with and through Him, you can! 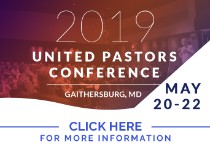 Attend the United Pastors Conference and leave energized and encouraged, with fresh ideas and proven know-how to grow your ministry and reach people for Christ.

As it has for over a decade, our weekly broadcast continues to provide fresh, contemporary insights into Christ's teachings. Tune in and "get practical" in your walk with the Lord!

Dale O’Shields is the founding and Senior Pastor of four campuses in Maryland, just north of the greater Washington, DC area.

Dale O’Shields is known for his relevant teaching style focused on practical application in people’s lives. His messages are regularly broadcast on radio and television. He is also the author of several books, devotionals and group study guides.

Dale O’Shields is a frequent conference speaker with a passion for leadership development and church growth. He has served as the Senior Pastor of a thriving local church for over 25 years. His heart to equip and encourage pastors and church leaders has led him to be a key founder of United Pastors Network.

Dale O’Shields has been involved in pastoral ministry since 1978, serving previously as Director of Campus Ministries and as an adjunct instructor at Regent University in Virginia Beach, VA. He and his wife Terry have two married daughters and seven grandchildren.