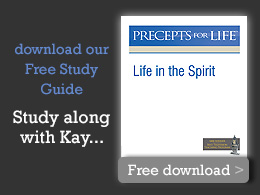 Life In The Spirit Study Guide

Be conformed to the image of Christ, as man was designed to be, through this powerful study of the Holy Spirit – His leading, filling, wisdom, intercession, righteousness, peace, joy and comfort.

About Precepts for Life

This half-hour Bible study program teaches you practical Bible study tools. Verse by verse you'll discover how to observe God's Word, interpret its meaning, and apply its truth to your daily life.

Kay Arthur’s exciting, practical approach to the Scriptures has influenced thousands to use the Inductive Bible Study Method in their personal studies. Her distinguished Christian character, Bible teaching, championing of the Inductive Bible Study Method, and national radio and television programs motivate others to discover truth for themselves. Kay’s passion is for people to be established in God’s Word.

At the age of 29, a divorced mother of two working as a nurse, Kay called in sick to the hospital where she was working because she was sick at heart, sick over the life of sin she had been living. She had a religion but did not possess a relationship with God. On the morning of July 16, 1963, she fell on her knees as a sinner and rose as pure and whole in the Lord’s sight. “For ‘Whoever will call upon the name of the LORD will be saved’” Romans 10:13, (NASB). “Therefore if anyone is in Christ, he is a new creature; the old things passed away; behold, new things have come” (2 Corinthians 5:17, NASB). She hungered and thirsted for the Word of truth and began studying the Bible. Her relationship with the Lord and scriptural findings turned her sorrows into joy and her mourning into laughter.

God’s love poured down upon her in 1965 when she married a missionary with the Pocket Testament League named Jack Arthur. Together they served as missionaries in Mexico for three and a half years until health issues led them back to the States. In Chattanooga, Tennessee, Jack began managing a Christian radio station, and Kay began a teen Bible study. Though the study started as a small gathering in the living room of the couple’s home, it soon grew from teens to college students to adults. From the beginning of the gatherings Kay’s and Jack’s deepest desire was to establish people in God’s Word. The ministry they founded in 1970 became Precept Ministries International where they served together as CO-CEOs until February 2012 when they stepped down and their son David assumed the role of CEO. Both Kay and Jack are still actively working at the Ministry.

Kay is the teacher and host of Precepts for Life, a daily television, radio, and online program which takes the student through the Bible book-by-book, verse-by-verse using the Inductive Bible Study Method. Precepts for Life has an audience reach of over 75 million households and broadcasts into over 30 countries. Precepts for Life was voted Best Television Teaching Program for 2004 and 2009 by the National Religious Broadcasters.

Arthur was awarded the prestigious NRB Hall of Fame Award at the 2011 National Religious Broadcasters Convention and Exposition. NRB's most prestigious award is presented to an individual NRB member for invaluable contribution to the field of Christian communications, exhibition of the highest standards and evidence of faithfulness in Christ.

She was awarded an Honorary Doctorate of Humane Letters from Tennessee Temple University for her outstanding biblical knowledge. She has written over 100 books and Bible studies, with over ten million in print. Four of her books have received the prestigious Gold Medallion Award. Kay was recently awarded the National Religious Broadcasters Association “Best Television Teaching Award” for Precepts for Life, Precept Ministries’ half-hour television program.

In February 2012 Kay was awarded the Lifetime Achievement Award by the Christian Women in Media Association. This esteemed award is presented to a CWIMA member for their faithful involvement and impact to Christian communications.