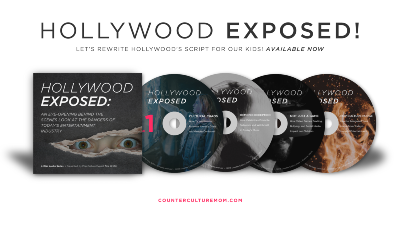 This live recorded 4-hour series provides an eye-opening, in-depth look at today's pop culture and the effects it has on our kids. This is a MUST for any parents with children who have a tech gadget, watch Netflix, ingest social media, play video games and use apps. That should pretty much cover every kid in America. Get this series for your family and another one for a family with teens, tweens, or toddlers. Makes a great gift. THE TOPICS COVERED IN THIS SERIES ARE AS FOLLOWS: How TV shows and movies promote identity crisis and gender confusion ●  How celebrities promote Satanism and Witchcraft in today’s music ● How video games, sexting, bullying and social media impact our children ●  How to safeguard your home from today’s harmful entertainment   Let's rewrite Hollywood's script for our kids!

Get Yours Today!
Stay Connected with your favorite Ministry Newsletters and Devotionals
More Newsletters
Sign Up
In addition to your newsletter(s), you will receive email updates and special offers from Lightsource.com.
Privacy Policy / Terms of Use
Podcast Cancel

About The Counter Culture Mom Show

Former Hollywood actress, pop culture expert, Tina Griffin, left her Wisconsin dairy farm and headed to Hollywood at the age of 20 to earn a BA in Film and TV from California State University - Los Angeles. During her decade working as an actress in LA, Tina talked with countless celebrities about their behind-the-scenes lifestyles and the hypocrisy involved. She realized “these secrets” must be revealed to the masses. Tina has traveled globally for the past 21 years delivering her eye-opening show, Hollywood Exposed, explaining the real agenda behind the entertainment industry and its negative impact on the foundational development of today’s youth.

Besides being in countless movies, Tina has worked on TV shows such as Jimmy Kimmel Live!, Young and the Restless, Days of Our Lives, Lizzie McGuire, Drake and Josh, Malcolm in the Middle, Boston Legal, Roswell, competed in the Miss America pageant and worked at the OSCARS. She was a member of the Film Society as well as Women in Film and the Screen Actors Guild. She has opened for bands such as Colton Dixon, Third Day, Jeremy Camp, and Skillet.

When Tina isn’t traveling and speaking, you will find her cooking, schooling her four munchkins, planning the next big adventure for her family, or having a romantic date night with her husband Luke.