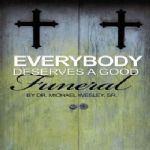 Everybody Deserves A Good Funeral

2nd Book written by Dr. Michael Wesley on the keys to having an effective funeral service for your loved ones.

The Mission of the Greater Shiloh Missionary Baptist Church is to Reach, Teach, and Baptize throughout the world beginning in our community, fulfilling the Great Commission by the power and presence of the Holy Spirit until Jesus returns.

Dr. Michael W. Wesley Sr. is a native of Birmingham, Alabama where he was educated in the public school system. He graduated from Tennessee State University, Nashville,Tennessee with a Bachelor of Science Degree in Music Education. He received a Master’s Degree in Music Education; a Class A certification in School Principal ship and the Educational Specialist Degree in Educational Leadership from Samford University in Birmingham, Alabama. In addition, Dr. Wesley received a Bible Diploma and Bible Certification from Birmingham Baptist Bible College. He completed the Beeson Institute for Advanced Church Leadership Program from Asbury Theological Seminary in Wilmore, Kentucky. Dr. Wesley earned the Doctor of Ministry Degree from Louisiana Baptist University and Theological Seminary in Shreveport, Louisiana May 2006.
Dr. Wesley retired in 2003 after a brilliant 26-year career as an educator in the Birmingham Public Schools. He served as a teacher, assistant principal and principal of three different schools (Powderly Elementary; Arrington Middle and was the first African American principal of Woodlawn High School). He served on the Central Office staff as Extended Day Principal and Coordinator of Safe and Drug Free Schools.
Dr. Wesley is regularly sought after to speak in both schools and churches. He has had the privilege of speaking across the nation and in several foreign countries. His spiritual gifts of teaching and preaching are well documented. He is a member of many organizations. His civic and professional associations are too numerous to mention.
Most recent is the evidence of his leadership, occurred with the completion of a multimillion dollar edifice and education facility located in the heart of the West End community.
Dr. Wesley is currently the pastor of the Greater Shiloh Missionary Baptist Church in the West End community where he has given thirty years of service. He has a great love for people and for learning.
He is married to the former Venita Burkes, and is the father of two sons, Rev. Michael Wesley Jr. and James Edward, one grandson and two granddaughters.
Dr. Wesley is the author of three books, When God Changes A Church, Everybody Deserves A Good Funeral and Reaching the Unchurched_Pathway to Church Growth.