Guys, when you think of big business in America, what comes to mind? Computers, oil, professional sports, the automotive industry? How about pornography? If it doesn’t, it should.

That’s because pornography is now considered to be more than a $10 billion-a-year business in America. Yes, you heard me correctly; I said billion! This isn’t exactly a new development either. As far back as 1985, the Ladies Home Journal gave an excellent exposé regarding the extent of that industry’s sprawling empire. Listen to these findings:

·         Americans spent far more on pornographic material than the $6.2 billion grossed by all three major television networks—ABC, NBC, and CBS—combined.

·         Fifteen percent of all videos sold in the United States are sexually explicit in nature.

The problem’s not getting better either. In fact, between 1985 and now, pornography’s become more accepted by mainstream culture, and more easily accessible to a wider audience—largely through growing mediums like cable and satellite television, and the internet. In other words, pornography possesses a large and ever-growing claim upon the inner lives, the leisure time, and the discretionary income of multiplied millions of Americans.

If you’re one of these people, you need to find a way to stop. This isn’t a harmless pastime. You’re destroying yourself, your loved ones, and contributing to our society’s undoing. Seek and secure whatever help you need, like our Every Man’s Battle workshop, but please stop! 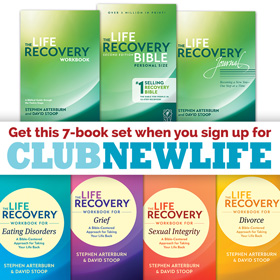 Steve Arterburn is the founder and chairman of New Life Ministries and host of the #1 nationally syndicated Christian counseling talk show New Life Live! heard and watched by over 2 million people each week on nearly 200 radio stations nationwide, on XM and Sirius Satellite radio and on NRBTV. Steve is the founder of the Women of Faith conferences attended by over 5 million people. He also serves as a teaching pastor in Indianapolis, Indiana.

Steve is a nationally and internationally known public speaker and has been featured in national media venues such as Oprah, Inside Edition, Good Morning America, CNN Live, The New York Times, USA Today, US News & World Report, ABC World News Tonight, and ironically in GQ and Rolling Stone magazines. Steve has spoken at major events for the National Center for Fathering, American Association of Christian Counselors, Promise Keepers Canada, Life Well Conferences in Australia and The Salvation Army to name a few.

Steve is a best-selling author of books such as Every Man’s Battle, Healing Is A Choice and his latest books, The 7-Minute Marriage Solution, The Book of Life Recovery, Is This The One? and recently co-authored Worthy of Her Trust with Jason Martinkus. With over 8 million books in print he has been writing about God’s transformational truth since 1984. He has been nominated for numerous writing awards and has won three Gold Medallions for writing excellence. Along with Dr. Dave Stoop, he edited and produced the #1 selling Life Recovery Bible. For a more comprehensive list of his books, visit our store site.

His speaking topics address issues common to leaders, adult men and women, including Every Man’s Battle, Lose it For Life, The 7-Minute Marriage Solution, Every Heart Restored, and Healing is a Choice. Steve’s ministry endeavors focus on identifying and compassionately responding to the needs of those seeking healing and restoration through God’s truth.

Steve has degrees from Baylor University and The University of North Texas as well as two honorary doctorate degrees and is currently completing his doctoral studies in Christian counseling.

Steve resides with his family in Fishers, Indiana.