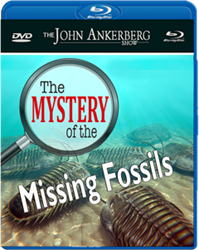 The Mystery of the Missing Fossils

You will see the astonishing evidence that has led scientists to conclude that fully developed, complex animals suddenly appeared on earth during the Cambrian age, and had no prior ancestors. And why this fossil evidence goes directly against Charles Darwin’s theory of evolution. Why an all-powerful intelligent designer is a better scientific explanation than Darwinism for the sudden appearance of fully formed animals in the fossil record.