Beyond the Debt Ceiling Crisis – Will America Survive?

America may be in big trouble, and it seems that perhaps half the country comprehends the severity of the situation:

"According to a June 8th [2011] CNN/Opinion Research Corporation poll, 48 percent of Americans believe that another Great Depression is likely to occur in the next year — the highest that figure has ever reached." [1]

Experts from many walks of life agree. The issue of government overspending and recklessness is far beyond membership as a Republican, Democrat, or Independent. It's now an issue of national survival. Three major rating agencies have already threatened to downgrade America's credit status, and it could happen any day, especially since the debt ceiling talks collapsed last Friday and a true resolution does not appear in the near future. Downgrading could have serious repercussions in addition to the current mess, although, in a sense, the US has already defaulted three times on its obligations during the 20th century by replacing gold and silver with paper money (1934, 1969, 1971). But raising the debt ceiling before August 2, without drastic cuts and an ironclad cap on spending will only postpone the inevitable.

In this light, defaulting would be a good thing; at least the pain would be less now than later and it would force some restrictions on spending due to higher interest rates. But not dealing with the problem immediately could be disastrous. As presidential candidate and Texas Representative Ron Paul observes:

"The national debt now stands at just over $14 trillion, while net total liabilities are estimated at over $200 trillion. The government is insolvent, as there is no way that this massive sum of liabilities can ever be paid off. Successive Congresses and administrations have shown absolutely no restraint when it comes to the budget process, and the idea that either of the two parties is serious about getting our fiscal house in order is laughable." "The alternative to defaulting now is to keep increasing the debt ceiling, keep spending like a drunken sailor, and hope that the default comes after we die. A future default won’t take the form of a missed payment, but rather will come through hyperinflation. The already incestuous relationship between the Federal Reserve and the Treasury will grow even closer as the Fed begins to purchase debt directly from the Treasury and monetizes debt on a scale that makes QE2 look like a drop in the bucket. Imagine the societal breakdown of Weimar Germany, but in a country five times as large. That is what we face if we do not come to terms with our debt problem immediately." [2]

Unfortunately, the president and many Democrats want to continue to tax and spend even in the face of a $14.5 trillion debt — an unimaginable amount of money reflecting an equally unimaginable deficiency of common sense and economic wisdom. Americans should be encouraged to let their voices be heard.

Given the facts surrounding unemployment (the true number, not the government’s [3]), the housing industry, commercial real estate, consumer debt, and a number of other factors, what we are looking at in a best case scenario is perhaps an American version of what has happened in Greece or Cuba; a worst-case scenario would be a hyperinflationary depression which destroys the currency and forces the nation into a barter system where all but the rich will suffer, many greatly so. (Zimbabwe demonstrated that both can occur simultaneously.) The reckless Keneysian economic policies of President Obama and many Democrats, the Treasury Department and the Federal Reserve are devaluing the currency and causing inflation while simultaneously ensuring high unemployment and possibly much worse.

Our nation has spent a mind-boggling $6 trillion dollars in just two and one-half years, much or most of it wasted. That’s more than all Presidents in US history. The US is currently adding $1.5 trillion in debt each year — each and every day — that’s about six billion dollars (6,000 million dollars every 24 hours). Forty percent of what we spend is borrowed money, which is simply unsustainable. With a $14.5 trillion debt and between $150-$200 trillion in total debt, unfunded liabilities, and more, there may simply be no way out, apart from drastic changes that most politicians and the electorate are unwilling to implement.

The Republican plan, "Cut, Cap and Balance” was a good one, and probably our only hope, but hardly anyone knew about it, much less the details because it received little attention and the Democratic Senate simply tabled it without any consideration. If the nation does fall, responsibility will lie largely with President Obama and the Democrats who hold the current political majority; that is simply a fact. Having only one third of the numbers, the Republican Party has limited power, which means from a human perspective, the fate of the country is in the hands of the people. Unfortunately, far too many Americans have grown complacent and are unwilling to make serious cuts where cuts are necessary.

The only way out of the current economic nightmare is drastic cuts in spending and a balanced-budget constitutional amendment that will force politicians on both sides to live within their means. That is unlikely to happen; all too often it is human nature to wait until it is too late.

Ultimately, the fate of our nation now rests in the hands of God Almighty. Committed Christians need to pray that God will bring revival to the culture and the Church. If this nation and worldly Christians will turn from their evil ways, he just might show us mercy. If not, we will soon see a very different America.

Regardless of our collective future, the following truths are inviolate:

1) God is always in control and knows what he is doing; his justice, wisdom, goodness and love can always be trusted, despite our personal circumstances;

2) for the Christian who loves God, "all things work together for good" (Romans 8:28) which includes everything that happens in the future, good or bad;

3) as Dr. John Piper (DesiringGod.org) observes, "One [heart] beat, then another, then another, on through the night, about 21,000 times while I sleep…. Any one of those beats could be my last. I cannot will my heart to beat one more time. If it stops, it stops. I and my time on earth are over" [4] and

4) people who have not yet turned to Jesus Christ as their Lord and Savior for a free gift of forgiveness of sins and a truly glorious eternal life must do so now, while the opportunity still remains. Now is not the time to live for ourselves; now is the time to live for God. "Time is precious. We are fragile. Life is short. Eternity is long." "No minute need be lived in vain. Eternity will render it significant if lived in faith for the glory of God." [5] 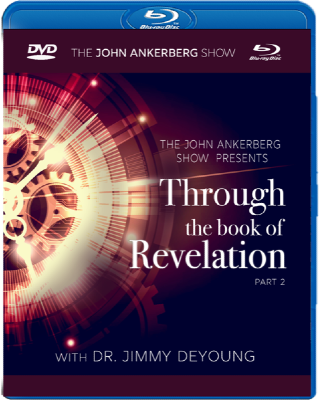 The John Ankerberg Show Presents: Through the Book of Revelation with Dr. Jimmy DeYoung, Part 2

Today, we will take you through the book of Revelation in a clear and concise manner, to help you understand its message and the future events God predicts are up ahead.