[Genesis 15] 8-21. Immediately Jehovah was ready to ratify the covenant with the man who had yielded himself to the divine will (cf. Gen 12:1-3). Hebrew berit is vari­ously translated "covenant," "compact," "solemn agreement," "testament," "trea­ty." No one of these words brings over into English the full meaning of this solemn transaction. In ancient times men sometimes ratified an agreement or cov­enant by passing between the parts of a halved, sacrificial animal. This "cut­ting of the covenant" was not in it­self a sacrifice. Rather, it was a sacred ceremony by which the men declared their solemn purpose to keep the agree­ment. Some Bible students have pointed out that in the instance recorded in Genesis 15:8-21, only one symbolic representative of the contracting parties—the lamp of fire (AV marg.), or "flaming torch" (cf. Jud 7:16,20), symbol of Jehovah—passed between the halves of the ani­mals. In other words, the covenant in this case was to be kept from the God-ward side alone. Only the Lord him­self could fulfill its promises. He would make Abram's descendants as numerous as the stars and give them a great land, stretching from the gates of Egypt to the mighty Euphrates. 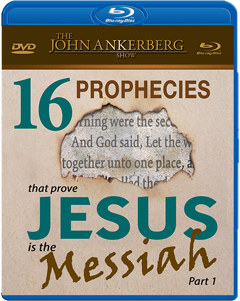 16 Prophecies That Prove Jesus is the Messiah, Part 1

Dr. Walter Kaiser and Dr. Darrell Bock share the amazing Messianic prophecies God has given us in Scripture. We will present 16 clues or prophecies that clearly identify the Messiah in the Hebrew Scriptures. This 4 program series is available in Blu-ray /DVD and has a Companion Study Guide perfect for group or individual study.