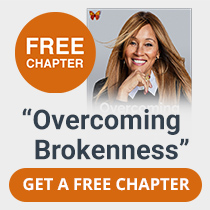 Overcoming Brokenness is taken from Cynthia Garrett’s book “Prodigal Daughter”, which features Cynthia’s testimony. This is a candid, real, raw and challenging look at a Journey Home To Your Identity. TV personality and Evangelist, Cynthia Garrett, shares an incredible red carpeted, celebrity filled, journey through her life, while teaching lessons that only experiences applied to the Word Of God can teach. Cynthia deals with the luring appeal of the media, the shattering of divorce, the shame of sexual abuse, the anger of rape, the fear in battling cancer, the challenges of single motherhood, the war for self-esteem, the confusion of fame, and the healing found in confronting brokenness head on. Cynthia Garrett leads you on a very personal and powerful journey to finally finding, owning, and living victoriously in your authentic identity.

Request Yours
Stay Connected with your favorite Ministry Newsletters and Devotionals
More Newsletters
Sign Up
In addition to your newsletter(s), you will receive email updates and special offers from Lightsource.com.
Privacy Policy / Terms of Use
Podcast Cancel