For years, Roger had poked and prodded Gordon, his oldest son, to be a better student. Roger was always a little disappointed in Gordon and his B-average grades. He never quite measured up to Roger’s expectations.

When Gordon was a senior in high school, Roger was puzzled by an invitation to a student awards assembly. He couldn’t imagine any awards that Gordon would win. Roger went to the event anyway, but grew increasingly annoyed at watching other students march up the aisle for applause. Why was he here? Why was his son so mediocre? Finally, the principal came to the last presentation—a new award for an exceptional student. Roger was astonished to hear Gordon’s name announced, followed by a long description of his son’s fine character, kindness, trustworthiness, and quiet leadership. The principal finished by thanking Gordon, saying, “No one who has really gotten to know you will ever be quite the same again.”

Roger had never gotten to know his son, much less appreciate him for who he was. In his efforts to teach and “improve” Gordon, Roger became blind to his son’s best qualities. It reminds us of this Proverb: “He who seeks good finds goodwill, but evil comes to him who searches for it” (11:27). Teach your children, but remember also to seek out and acknowledge their positive traits. You’ll discover a son or daughter to be proud of.

Before you say good night…

Heavenly Father, teach us to value our children for who they are, rather than who we wish them to be. Help us to know their thoughts and dreams, their strengths and weaknesses, their fears and failures. Enable us to love them unequivocally, just as You love us. Amen.

Listen to today's broadcast of Dr. James Dobson's Family Talk at OnePlace.com.  For more from Dr. Dobson, visit the resource center at drjamesdobson.org.

This devotional is taken from Night Light for Parents. Copyright © 2000 by James Dobson, Inc. All rights reserved. Used with permission. 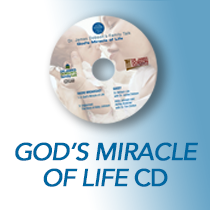 Dr. James Dobson and Dr. William Lile, a pro-life OB/GYN, discuss the miracle of conception and the amazing medical advancements enabling intricate surgeries to be performed on babies while in the womb.