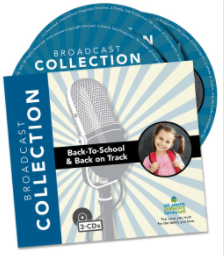 Back-to-School & Back on Track (3-CD Set) by Dr. James Dobson