Head of the House
by Thom Hunter

My preteen son Patrick doesn’t take many things seriously, but occasionally something grabs hold of him and he just won’t let it go. He will question an idea or concept until he is satisfied that society isn’t misleading him and that all is right in his world.

I’m never prepared for his persistence.

“Dad, can we go to the movies today?” he asked as we crawled down the optimistically named Northwest Expressway. “Maybe,” I said. “I’ll check with Mom when we get home.” “She’ll say no,” he said. “She’ll say we need to clean our rooms, or read a book, or play outside. Or . . . or something else.” The tires on the van made a couple more rotations. “Dad?” asked Patrick. “Can we get another hamster?” What a radical idea. We hadn’t had a hamster die on us in weeks. “Well, maybe,” I answered. “We’ll see what Mom thinks.”

I turned off the radio. “Dad?” came the voice again. “Can we eat out tonight?” “Probably,” I said. “If Mom doesn’t already have something planned.” I pushed a cassette tape into the player. “Dad?” Patrick asked. “Is Mom the head of our house?” Wham! I felt like I was in a ten‐car pileup. My face was turning red.

My temperature was rising. I was suddenly feeling closed in by the cars surrounding me. I looked in the rearview mirror. Patrick was perched in the middle of the seat behind me, an innocent little grin on his face.

“Patrick,” I said, “I am the head of the household. I make the decisions. And don’t you forget it. Understand?”

“Okay,” he said. “Does that mean we can eat out, go to the movies, and pick up a new hamster on the way home?”

He’d set me up. And I almost fell for it. He was watering down the parent partnership, looking for a crack in which to stick a wedge, testing a biblical concept, and looking for the advantage in the process.

What do pizza, hamsters, and big‐screen fantasy have to do with whether or not I am fulfilling my role as head of the family? I asked myself that question as I zeroed in on the bumper in front of me. I slammed on the brakes and avoided the accident. Fortunately, we were at the expressway’s top speed of seven miles an hour.

For scoring purposes, we did eat out and go to the movies that night, but we decided to sell the hamster cage. “We” made those decisions, his mother and I. This “head of the household” thing is very touchy to me. When I was growing up, there was never any doubt. Mother was the head of the household. But she had never intended it to be that way. She was sup‐posed to have had a partner. She understood the concept of a helpmeet. If my father had been a different kind of man and hadn’t left us when I was six years old, she would have made a wonderful complement to him.

“You must be a man,” she would tell me when I was a teenager. “Take the responsibility; don’t run from the decisions; love your wife; cherish your children.”

And be the head of the household.

So I always wanted to be the head of the household: ruler over all I surveyed, supreme commander, father and master of my many loyal subjects. I carried this dream to the altar and later into the delivery room—five times. My kingdom went from squalling to crawling to sprawling all around me.

If I am the head of the household, why do I have to barter for time to watch a football game on television, promising to ride bikes for two hours in exchange for ten minutes of solitude?

And, if I am the head of the household, why do I have to cover five other bodies before I pull my own blanket up to my own chin; explain away everybody else’s nightmares before I take on my own; fluff their pillows and tuck their feet back under the sheets; get them one more drink; and plug in their night‐lights?

And if I am the head of the household, why do I have to rub my wife’s back before she can go to sleep?

That’s what I’ll tell Patrick next trip down the Northwest Express‐ way. We’ll have plenty of time.

Husband, this week is designed especially for you. (But we still want your wife to participate!) Like the author of the story above, do you sometimes struggle with your role as “head of the house”? What exactly does that mean, anyway? It is a controversial topic in today’s world, but there are biblical truths on which to base an understanding.

We’ll offer some of these principles this week. For tonight, why don’t you tell your wife how you define “head of the house”—then ask if she agrees.
- James C Dobson

• “Head of the House” by Thom Hunter. Taken from Those Not-So-Still Small Voices (NavPress). © 1993. Used by permission of the author.

Listen to today's broadcast of Dr. James Dobson's Family Talk at OnePlace.com.  For more from Dr. Dobson, visit the resource center at drjamesdobson.org.

This devotional is taken from Night Light for Couples. Copyright © 2000 by James Dobson, Inc. All rights reserved. Used with permission. 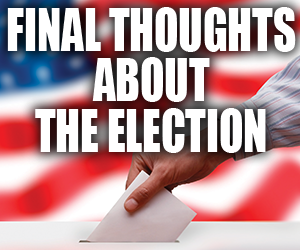 Final Thoughts About The Election

With all respect, the national election isn’t about you. It certainly isn’t about me. It is about our kids and grandkids. It is about those who are yet to come, if they are allowed to live. This vote has awesome implications for future generations and the nation we love. It is about our Constitution and the immutable, God-given rights it protects. It is about values, and truth, and greatness, and hope. That is why the notion of choosing a president based on frivolous personality characteristics, such as style or rhetoric, misses the mark.