Have you ever noticed that there are certain sins people just don't like to admit are problems for them?  Jealousy seems to me to be one of those sins.  People will readily admit to having struggles with worry, lust, fear, unbelief, pride, or selfishness. but not with jealousy and envy.  As one envious man defensively told me in a meeting one day, "Well, I KNOW that I am not jealous!"  Oh really?  To quote William Shakespeare, "Me thinks thou dost protest too much."

Saul was green with envy over David.  He hated the women's song, "Saul has slain his thousands, and David his ten thousands."  Big question: Do you think Saul would have admitted he was jealous of David?  NEVER!  Why is that?

Admitting jealousy reveals a great insecurity and a very rotten heart. and no one really wants to admit to having that kind of heart.  Our pride kicks in at the thought of being jealous and we say, "Who me?!!  No way!"  The truth is that many of us struggle with jealousy. and pastors can be the worst offenders.

1.  Is there someone in your life (a friend, a sibling, a co-worker, a classmate, a teammate, or a "competitor") whom you always seem to compare yourself to, resulting in pride (YES, I am doing better than you are) or depression (CRUD, you are doing better than I am)?

2.  Is there someone in your life who always seems to get the breaks. and it just makes you sick because you never seem to get them?

3.  Is there someone in your life whom you secretly desire to see fail and fall flat on his face?

4.  Is there someone in your life whom you have anger towards because people are singing louder and longer for him than they are for you?

5.  Is there someone you have great trouble rejoicing with when something good happens for him?

Could it be that you, like Saul, are (dare I say it?) jealous?

By nature, I am a very competitive person.  In everything I do, I want to win.  If the women of Israel are going to sing a song about slaying the Philistines, I want to be the one slaying ten thousand, not one thousand.  I want to be David, not Saul.  How about you?

My competitiveness can easily lead to jealousy if I am not careful.  When I catch myself failing the jealousy test, I must quickly do the following to rid my heart of that poison:

1.  QUIT COMPARING!  I am not to be concerned with being THE BEST.  I am to make sure I always do MY BEST.  Do you see the difference between these two things?

In Matthew 25, Jesus told a great parable of the talents.  The King was going on a long journey and entrusted his talents (a large sum of money) to his three servants.  One man got five, another got two, and another got one.  Obviously, the guy who started with one could NEVER outdo the guy who started with five.  He could not be the best and the biggest producer in that parable.  But he was not in competition with the other two guys.  The Lord was concerned about the one talent guy doing his best, not being the best.

At the end of life, the big questions from the Lord will be simply this: What did you do with what I gave you?  Did you do your best and step out in faith?  Did you use that one talent to the full, to the glory of your God. or did you bury it in the ground, grumbling the whole time that you never get a break, that others always get more than you do, and that God is just not fair?

My friend, quit comparing and start using what you have been given.  Do your best and leave the results with God.

Saul's life was a tragedy of epic proportions because jealousy consumed him. He could have had a great reign, utilizing a gifted champion like David to the full in his kingdom. Instead, he spent the vast majority of his 40 year reign as a jealous despot, living a life full of misery, anger, bitterness, paranoia, and distance from God.  What a sad picture of the ravaging effects of jealousy.

Don't let jealousy eat your lunch as it ate Saul's. Quit comparing, start realizing, and enjoy a life lived for His glory and the fame of His name!

Dr. Jeff Schreve believes that no matter how badly you may have messed up in life, God still loves you and has a wonderful plan just for you. From His Heart provides real truth, love and hope on over 700 radio stations each day, in 182 countries each week on TV, and is always available online.  Pastor Jeff takes no income from this ministry. All donations go to furthering the broadcast outreach. As a listener/viewer supported ministry, we thank you for joining with us to help speak the truth in love to a lost and hurting world. Go to www.fromhisheart.org for more information. 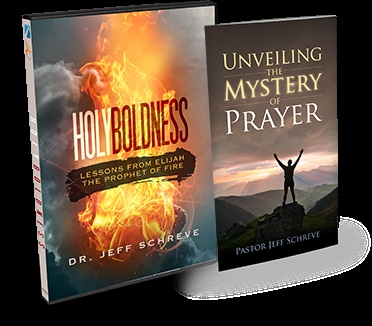 Discover How to Rise Above Your Discouragement!

Unveiling the Mystery of Prayer booklet and Pastor Jeff's new 8 message series, Holy Boldness: Lessons from Elijah the Prophet of Fire -  Our gifts of thanks for your support this month.

Rising to the Challenge: A Study of the Book of Joshua - Series

Moses is dead. Joshua is now the new leader of Israel. Needless to say, Joshua has some BIG shoes to fill. He must rise to the challenge as he trusts the Lord and walks by faith. The same is true for us. In this series, Pastor Jeff Schreve shares powerful insights from the Book of Joshua that will help us walk in victory and possess our Promised Land!

About From His Heart

From His Heart Ministries is the TV, Radio and Internet broadcast outreach of Dr. Jeff Schreve who believes that no matter how badly you have messed up in life, God loves you and has a wonderful plan for your life. We’re on mission to help a new generation discover their creator through the preaching of the compassionate, relevant, yet uncompromised truth of the Gospel. Pastor Jeff speaks the truth in love with clear biblical content combined with engaging, personal stories. His messages are filled with life-giving principles for everyday living and eternal assurance.

On Television: From His Heart is seen each week on Lightsource and also around the world on The Hillsong Channel, NRBTV, The Walk TV, and hundreds of TV stations across America and around the world. Go to Click Here to find the station near you.

On Radio: Click Here to listen to the daily radio broadcast available on OnePlace.com as well as 720+ outlets across America.

Jeff's life has been radically changed by Jesus Christ.
Growing up in a church-going home, Jeff learned a lot about God, but he did not know God. He believed in Jesus in the same way he believed in George Washington: he knew Jesus was real, but had not personally met Him. All this changed one night after a Young Life meeting when he was alone in his bedroom. There Jeff saw his need for Christ and His forgiveness and surrendered his life to Jesus.

As a student at the University of Texas, Jeff grew in his Christian life. He graduated with a degree in business and moved back home to Houston, Texas to start a career in business. There he met his future wife, Debbie, at a single's group meeting at Champion Forest Baptist Church. They were married in 1986 and have been blessed with a wonderful relationship and three awesome daughters and two beautiful grandchildren.

A New Direction
After spending 13 years as a chemical salesman, God called Dr. Schreve to preach. He left his secure position and moved his family to North Carolina to attend Southeastern Baptist Theological Seminary. It was a scary and difficult move to make ... but it was one of the best decisions they have ever made. One year later, God called them to serve on staff at Champion Forest Baptist Church. In 2000, he completed his Master of Divinity degree graduating from Southwestern Baptist Theological Seminary. He graduated with a Doctor of Ministry degree in 2014 from Southeastern Seminary.

Jeff Schreve has been the senior Pastor of First Baptist Texarkana in 2003, a growing and exciting church with 4500+ members.