The Hope of Jesus’ Return

Christmas is the story of the eternal God, in the Person of Jesus Christ, leaving Heaven’s glory, coming to Earth, and living among us, one day to become our sacrifice for sin by His death on the cross. But the story is unfinished if it ends there. The meaning of Christmas isn’t complete until you understand that the Christ of Christmas is coming again.

His incarnation isn’t the whole story. His coronation day lies ahead. The incarnation without the coronation would be like an engagement without a marriage. Christmas is wonderful, but the best is yet to be.

God has much more for us when Jesus comes again. We focus at Christmastime on the baby in the manger, who came to die for our sins, but that’s only the beginning of redemption’s story.

Jesus’ First Coming and Second Coming are linked together. Every word of what the angel said to Mary about Jesus’ birth in Luke 1:28-31 was fulfilled. But in verses 32 and 33, he also told her what would and will follow: “He will be great and will be called the Son of the Highest; and the Lord God will give Him the throne of His father David. And He will reign over the house of Jacob forever, and of His kingdom there will be no end.”

He told her of the Jesus who not only would redeem but also will forever reign; the One who comes the first time, but then comes again.

The hope for this world is the Second Coming of Jesus Christ; Paul assured us of this in 1 Thessalonians 4:16-17: “For the Lord Himself will descend from Heaven with a shout, with the voice of an archangel, and with the trumpet of God. And the dead in Christ will rise first. Then we who are alive and remain shall be caught up together with them in the clouds to meet the Lord in the air. And thus we shall always be with the Lord.”

Think of the contrast between the first time Jesus came and the second.

Remember the glory of that as I point out three things bringing Christmas cheer in this weary world.

Are you troubled today? It’s not over yet. Today Jesus is despised and rejected. But the darkest hour of night is just before sunrise. Our hope is not in politics, sociology or science. Our hope is the Second Coming of the Lord Jesus Christ.

When we see Jesus, we won’t see a baby in the straw. He will come as the conquering King. His coming is like sunrise; you can’t hurry it and you can’t stop it. Jesus is coming again.

The Thessalonians were unsettled by a letter claiming to be from Paul. But it was a lie stating they had missed the Rapture, and the Great Tribulation was underway.

Paul wanted them to understand that though they were going through excruciatingly hard times, they weren’t in the Great Tribulation, nor had they missed the Rapture.

He wrote Second Thessalonians to resettle the people in the truth. Paul reassured them by giving the correct sequence around Jesus’ Second Coming. They hadn’t missed it.

The Second Coming of Jesus Christ is in two stages: First, He comes secretly in the air for His church (“the Rapture”). Second, He returns sovereignly with His church.

“But we are bound to give thanks to God always for you, brethren beloved by the Lord, because God from the beginning chose you for salvation through sanctification by the Spirit and belief in the truth, to which He called you by our gospel, for the obtaining of the glory of our Lord Jesus Christ” (2 Thessalonians 2:13-14). 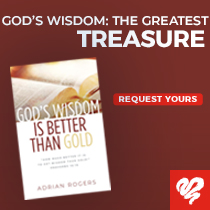 God wants you to enjoy the abundant life. And the first step to that life is to search for wisdom as a man seeks for gold. Far from the fool's gold of "name it and claim it" theology, this study of Proverbs leads the way into King Solomon's mines, wherein lies the true treasures of heaven.