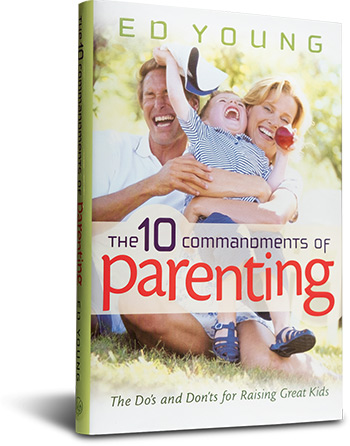 Discover the power to persevere as a parent!

A lot of parents are scrambling for guidance when it comes to raising kids in today’s culture. But only God’s blueprint offers proven truth to help you have a truly healthy and happy home. That’s why we want to send you Dr. Ed Young’s The 10 Commandments of Parenting –it’s full of practical, biblical advice to give you or some parents you know strength, joy, and purpose in life’s greatest challenge and most important calling.

Donate
Stay Connected with your favorite Ministry Newsletters and Devotionals
More Newsletters
Sign Up
In addition to your newsletter(s), you will receive email updates and special offers from Lightsource.com.
Privacy Policy / Terms of Use
Podcast Devotionals Articles Cancel

About The Winning Walk

The Winning Walk with Dr. Ed Young is the international on-air and online teaching ministry of Dr. Ed Young, Senior Pastor of Second Baptist Church in Houston, Texas. The Winning Walk proclaims the proven truth of God’s Word to give men and women the world over a winning way to live life.

Dr. H. Edwin Young was born in Laurel, Mississippi. He accepted Jesus Christ as his Savior at the age of 12 through the leading of his pastor's wife, Mrs. Gates.

Following graduation from high school in Laurel, Dr. Young entered the University of Alabama as an engineering major. Mid-way through his freshman year, challenged by an atheist in his dorm who questioned his belief in God, he began to seek God's purpose for his life. Six months later, he surrendered to the call to preach the Gospel, and enrolled at Mississippi College to continue his education.

On June 28, 1959, he married Jo Beth Landrum. Dr. Young's preparation for the ministry continued at Southeastern Baptist Theological Seminary in Wake Forest, North Carolina. His first pastorate was in North Carolina, and he pastored in North and South Carolina until 1978 when he moved to Houston, Texas. He became the pastor at Second Baptist Church where he continues to pastor today. The congregation has grown from 2,000 members in 1978 to over 6 campuses and we have reached over 70 thousand members.

Dr. Young was elected president of the Southern Baptist Convention in June of 1992 and again in June, 1993. He is the author of many books including, Total Heart Health, The 10 Commandments of Parenting, and The 10 Commandments of Marriage. Dr. Young's broadcast ministry, The Winning Walk, can be seen and heard across North America and throughout the world.