The Reality and Relevance of the Resurrection

What is the most fantastic of all Christian claims? The most fantastic of all Christian claims is that Jesus rose from the dead! It strains our credibility to the limit! Human beings have tried with all possible ingenuity both to defy and to deny death. But only Christ has claimed to conquer it, that is, to personally defeat it and to deprive it of its power over others.

The very first Christians enjoyed great confidence in the resurrection of Christ! This is clear from: 1) their earliest preaching, and 2) their willingness to die for Him. Shortly after Pentecost, the Jewish authorities were greatly disturbed because the apostles were “proclaiming the resurrection of Jesus Christ from the dead” (Acts 4:2). The heart of their preaching followed this pattern: you killed Him, God raised Him and we are witnesses.

In the original Gospel that Paul had received (1 Cor. 15:3-8), he concentrated on matters of first importance: the death, burial, resurrection and post-resurrection appearances of Jesus. The earliest followers of Jesus were both clear and confident about the historical fact of the resurrection of Jesus Christ!

There are three major questions that arise by the claim that Jesus rose from the dead: 1) what does Paul mean by the resurrection, 2) did it really happen, and 3) is it important?

A. Negatively – What the resurrection is not: It may be initially helpful if we first clarify what it does not mean before affirming what we do mean. The resurrection of Christ is not just:

1. A Surviving Influence (Jesus is not a ghostly influence)

It’s not like the movie ghosts where He merely survived death. Following the resurrection Jesus said to his disciples, “look at my hands and feet. It is I myself! Touch Me and see; a ghost doesn’t have flesh and blood as you see I have” (Luke 24:39). The resurrection does not merely mean the continuing influence of Jesus after His death-the memory of His example.

3. A Revived Faith (the resurrection is not just a revived faith in the disciples)

Liberal theologian Rudolf Bultmann said, “Easter was not an event but an experience... a subjective, personal discovery of faith in the hearts and minds of his followers.” But what caused the disciples revived faith? The resurrection!

4. An Expanded Personality (The resurrection is not an event without a body)

The resurrection was not merely an explosion of the personality of Jesus through His disciples.

Jesus’ body literally came out of the grave!

5. A Living Experience of the Spirit (It was not merely increased spiritual insight)

This view says that the resurrection of Jesus was not a visible appearance but the reception of a new revelation given by the Holy Spirit – a spiritual and intellectual apprehension. All these views are inadequate to explain the facts.

B. Positively – What is the resurrection?

While Jesus is the same person in terms of identity (Luke 24:39), the resurrection gave Him a transformed, transfigured, glorified, spiritual body.

2. The resurrection was a dramatic act of God by which He arrested the natural process of decay

(Acts 2:27), rescued Jesus out of the realm of death and endowed Him with new powers and possessing immortality.

3. Two aspects of the resurrection are clear from our text:

1) It was an objective historical event. It was datable; it happened on the third day. 2) The resurrection was a physical event; it involved His body. The four verbs in our text, “died, buried, was raised and appeared,” all have the same subject: Jesus Christ!

If we accept the fact that Paul and the other apostles believed in a literal, datable, physical resurrection and transformation of Jesus; were they correct? Can we who live in this sophisticated and scientific contemporary culture also believe in the resurrection?

What is the primary evidence for the resurrection?

If Jesus merely fainted on the cross and was revived in the tomb, He would have come forth not as one who conquered death but as one who was seriously wounded in need of immediate medical attention. Both the Roman centurion and Pilate assured themselves that Jesus was, in fact, dead.

Did the disciples steal the body as part of a hoax in order to deceive people into thinking that He had risen? If so then they were all willing to die a martyr’s death for a lie which they knowingly perpetuated. No explanation of the empty tomb holds water except that God had raised Him from the dead!

The appearances were not merely hallucinations, for there was a great variety of time, place, mood and people in regard to the appearances, together with people’s initial reaction of unbelief, which make the theory of wishful thinking untenable. The only alternative is valid, objective appearances.

III. Why Is The Resurrection Important?

1. First, the resurrection of Jesus Christ assures us of God’s forgiveness.

Forgiveness is, on one hand, our most basic need; and on the other hand, it is God’s best gift! For

God so loved the world that He gave His best gift in order to meet our most basic need!

While our conscience can nag, condemn and torment us, only Christ can forgive us and free us from the penalty of sin. There simply is no other effective way of dealing realistically with the guilt of our sin!

If He had remained dead, we would never have known. Without the resurrection we would have to conclude that His death was a failure. Paul said “If Christ has not been raised, our preaching is useless and so is your faith.” Again, “if Christ has not been raised, your faith is futile, you are still in your sins… those who have died in Christ are lost” (1 Cor. 15:14, 17-18)

The terrible consequences of no resurrection would be that the apostles are false witnesses, believers are un-forgiven and Christians who have died have perished. But, in fact, Paul continues, Christ was raised from the dead and His resurrection validates His teaching and His substitutionary death on the cross.

2. Secondly, the resurrection of Christ assures us of God’s power. We need power in the present as well as forgiveness of the past. Just as Christ’s forgiveness removes the penalty of sin, even so

Christ’s power increasingly frees us from the power of sin in our lives.

Is God really able to change human nature which appears to be so intractable? Can He make cruel people kind and selfish people unselfish? Can He make immoral people self-controlled and sour people sweet? Is He able to take people who are spiritually dead and make them alive in Christ?

The answer is a resounding YES! YES! YES! YES! YES! YES! YES! He is able to give life to the spiritually dead and to transform us into the likeness of Christ! These great claims can only be substantiated by the resurrection. For the power available for us today is the power that raised Jesus from the dead! (Eph.1:18-20)

We are always in danger of trivializing the Gospel – minimizing what God is able to do for us.

Becoming a Christian is something radical – it’s a decisive act of God. It’s a resurrection from a death of alienation and self-centeredness and a new beginning of a liberated life! The same power that raised Jesus body from physical death can raise our spirit from spiritual death. We know God can and will raise us because we know He raised Jesus!

3. Thirdly, the resurrection of Jesus assures us of God’s ultimate triumph. While… 1) the existentialists offer extinction, 2) the Hindu religion offers an endless cycle of reincarnations, 3)

Karl Marx promises Utopia on earth, and 4) the secular humanists dream of taking control of their own evolution, 5) Christians, on the other hand, offer a vision of a glorious future free from all sin and death – they offer a vision of the Kingdom of God!

Jesus not only rescues His disciples from meaninglessness but also from the threat of annihilation. For our labor is not in vain in the Lord; because He lives, we shall live also! We will not only survive death, we will be raised from it. We too shall be given new bodies like

Christ’s resurrected body with new and undreamed of powers. “Eye has not seen, nor ear heard nor has entered the heart of man what God has prepared for those who love Him!”

Our hope for the future goes beyond our personal future, it’s also cosmic! Jesus is going to return in spectacular magnificence in order to bring history to its eternal fulfillment. The Apostle Paul expressed it this way: “For God has allowed us to know the secret of His plan and it is this: He purposes in His sovereign will that all human history shall be consummated in Christ, that everything that exists in heaven and on earth shall find its perfection and fulfillment in Him”

The resurrection of Jesus Christ is the ground for our blessed hope and earnest expectation. It provides solid, visible, tangible, public evidence of God’s plan to redeem us and His creation.

The resurrection enables us to face:

1. Our past (however much we have been ashamed of it), confident of God’s forgiveness who died for our sins and was raised;

2. Our present (however strong our temptations and heavy our responsibilities), confident of the sufficiency of God’s power; and

3. Our future (however uncertain it may be), confident of God’s final triumph, of which the resurrection is the pledge. It brings us firm assurance in an otherwise unstable and insecure world. Jesus is risen! He has risen indeed! 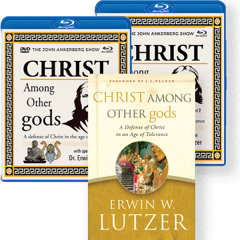 Christ Among Other Gods

When it comes to religious leaders, Jesus Christ is different from all the others in some important ways. What makes Jesus Christ different? What can we learn from Jesus about truth? Is some truth more true than other truth? The greatest human need, Erwin Lutzer explains, is not to have gurus or prophets to tell you how to live. What we need is someone who can actually forgive our sins, introduce us to God, and declare us righteous before God.  In this series Dr. Lutzer will explain why Jesus—and no other religious leader—is able to fulfill that greatest need.

Order
Stay Connected with your favorite Ministry Newsletters and Devotionals
More Newsletters
Sign Up
In addition to your newsletter(s), you will receive email updates and special offers from Lightsource.com.
Privacy Policy / Terms of Use
Podcast Devotionals Articles Cancel