“He saved us through the washing of rebirth and renewal by the Holy Spirit.” Titus 3:5 (NIV)

Isn’t salvation about my past sins and my future in heaven? What does God’s grace mean for me today? Sin brings with it two long-term consequences — a penalty against us, and a power within us. God saves us from the penalty and the power.

I want to introduce you to three characters to help you understand how He does this. Their names are Hostile, Helpless and Hopeful. Which one do you identify with most?

Hostile: Without desire or ability
“The sinful mind is hostile to God. It does not submit to God’s law, nor can it do so.” Romans 8:7 (NIV)

Hostile has no desire to follow God’s law. Even if he had the desire, which he doesn’t, he does not have the ability. You will meet Hostile all throughout the Bible story:

In Cain’s hostility toward God, he became angry and killed Abel (Genesis 4:8). But Pharaoh’s hostility was more subtle. When God said “Let my people go” (Exodus 5:1), he just dug in his heels. Hostile’s greatest day was when Jesus was brought before the crowd, and they shouted “Crucify him!” (Matthew 27:22-23).

Helpless: Desire without ability
“I see another law at work… waging war against the law of my mind and making me a prisoner of the law of sin…” Romans 7:23 (NIV).

The difference between Helpless and Hostile is that, while Hostile hates God’s law, Helpless loves it: “In my inner being, I delight in God’s law…” (v22), “I agree that the law is good…” (v16). Hostile would never say these things. He hates God’s law.

Helpless knows God’s law is good. He wants to do it, but he doesn’t have the ability. He’s a prisoner in chains, unable to get free. He feels miserable “What a wretched man I am!” and cries out “Who will rescue me from this body of death?” (v24).

Hopeful: Desire with ability
“Through Jesus Christ the law of the Spirit of life set me free from the law of sin and death.” Romans 8:2 (NIV)

Like Helpless, Hopeful has the desire to live a godly life. The difference lies in their abilities. Paul tells Hopeful to “Put to death the misdeeds of the body” (Romans 8:13). Helpless would just say “I’m a prisoner! I can’t overcome this enemy.”

Hopeful is in an entirely different position! He has the desire to fight against sin in his life, but he also has the ability to prevail. Notice that they face the same battle. Hopeful still feels the power of temptation, and he still has failures. But Hopeful’s ability to prevail comes from the Spirit of God who lives in Him.

What God says to you today
To Hostile, God says that He “demonstrated his love for us in this: while we were yet sinners Christ died for us” (Romans 5:8). Christ went to the cross so that those who were once enemies of God could become His friends. God loves you, so repent!

Notice the answer God gives when Helpless asks “Who will deliver me from this body of death? Thanks be to God through Jesus Christ our Lord!” (Romans 7:24-25). Christ will rescue you! The Christian life is about the power of God living in you. Ask and you’ll receive. Your heavenly Father gives the Holy Spirit to those who ask Him.

What does God say to Hopeful? “Put to death the misdeeds of the body” (Romans 8:13). The Spirit is in you! So, fight! When you fail, your enemy comes to you saying “You’re so weak. You were never any good. You’re my prisoner.” The only way to answer him is with the truth, and when you know the truth, it will set you free!

From the series by Pastor Colin S. Smith: Unlocking the Bible, Nature, August 26, 2001. 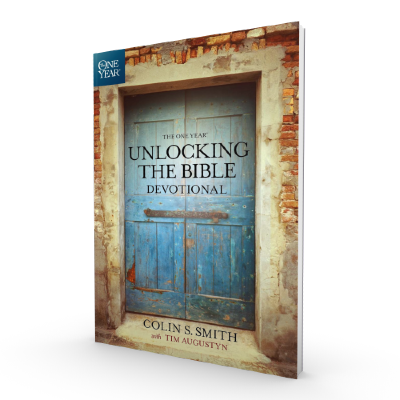 The One Year Unlocking the Bible Devotional by Colin Smith

Spend a year unlocking the mysteries of the Bible! Have you ever wondered how the Bible works together as a whole? Or how events from the New Testament were foreseen in the Old Testament? Walk through the Bible one day at a time, and you will uncover the deep truths of the Bible story. It is one story—the story of Jesus Christ. Each day’s devotion offers a selection from Scripture, an insightful teaching devotional, and an additional Scripture reference for further study. (377 pages, Paperback)

Donate Now
Stay Connected with your favorite Ministry Newsletters and Devotionals
More Newsletters
Sign Up
In addition to your newsletter(s), you will receive email updates and special offers from Lightsource.com.
Privacy Policy / Terms of Use
Podcast Articles Cancel

About Unlocking The Bible: Daily

Have you read through the whole Bible? That’s what Pastor Colin Smith challenged his church to do a few years ago. Many had tried this before and failed, but this time two things would be different.

• First, they would do it together, providing encouragement and accountability.
• Second, Colin would preach each Sunday from the Bible book they were reading.

More than 1400 people made that commitment — almost 75% of the church.

Now we have the joy of inviting you to Unlock The Bible for yourself as you listen to Colin Smith’s teaching here on LightSource.

At www.UnlockingTheBible.org, you can join an online community reading through the Bible in a year. You’ll also find plenty of spiritual growth resources designed to challenge you to grow in Christ. We want to see God work and pray that many people will discover the Bible story in a new way, and share it with others.

Colin Smith was born in Edinburgh, Scotland. He came to personal faith in Christ at the age of six, and sensed God's call to pastoral ministry early in life. He received his Bachelor of Arts in Theology and Master of Philosophy from London Bible College. Before coming to the States in 1996, Colin served as the Senior Pastor of the Enfield Evangelical Free Church in London for 16 years. While in London, he was active in the Fellowship of Independent Evangelical Churches in England; and served the Fellowship as president.

Colin currently serves as Senior Pastor of The Orchard, a Gospel-centered church in the Chicago area, with campuses in Arlington Heights, Barrington, and Itasca, Illinois. He is committed to preaching the Bible in a way that nourishes the soul by directing attention to Jesus Christ. He has published several books with Moody Publishers and is the teacher of the popular evangelistic video series, 10 Keys for Unlocking the Bible Story.